This article isn't intended as a detailed set-up guide, but rather as an overview of the terms associated with cartridge alignment. For a more step-by-step guide, I refer you to our article: Turntable Set-Up

When one stops to ponder the relationship of the stylus to groove, the numbers boggle the mind. Groove width on a vinyl LP ranges from .001" - .0014" (.025mm - .035mm). Contrast that with a human hair which measures .006" - .007" (.17mm - .181mm) and it's amazing that vinyl reproduction works at all, much less as well as it does. With those numbers in mind, you quickly realize how critical cartridge alignment becomes. The relationship of the stylus to the groove is incredibly minute, requiring precise alignment, with no room for error. Furthermore, poor alignment can lead to asymmetrical stylus and record wear. The stylus exerts tremendous forces on the groove walls. Though a tracking force of 1.5 grams seems rather insignificant, when translated to the small contact area of the stylus, we're looking at about 340 pounds per square inch!

Now that you're afraid to go near your cartridge, be heartened, setup is not as difficult as you might think. With the help of a few simple tools, and equipped with some basic knowledge, you can fine-tune your analog rig for optimum performance. Let's take a look at the areas of adjustment.

Vertical Tracking Force (VTF): Setting tracking force is the very first step in setting up a cartridge (though it will be repeated later to fine-tune). The cartridge manufacturer will recommend a range (e.g. 1.75g - 2.0g) that is appropriate for their design. Too little tracking force and the stylus will not seat properly in the groove, too much tracking force and you'll overload the internal suspension, and both resulting in a loss of performance. Interestingly, too little tracking is more likely to increase wear than a setting that is slightly too high. 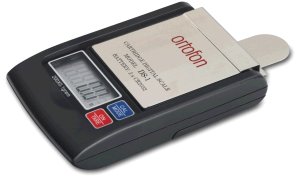 More than just applying force to seat the stylus in the groove, the correct tracking force aligns the internal generator assembly. For a finely tuned rig, it is important to experiment within the manufacturer's recommended range to find the precise point that gives the best sound. The amount of difference between the different settings within the range may be significant or negligible depending on the cartridge brand/model and the resolution of the system to reveal the changes.

There are a number of options when it comes to tracking force calibration, which one is best will be determined by the quality of the system involved. A quick adjustment using graduations on the arm or an inexpensive balance beam scale is adequate for modest systems but is not accurate enough for a high-end turntable set up. At that level, we strongly recommend the use of a digital stylus force gauge, such as the DS-1 from Ortofon (pictured).

Overhang: As the stylus tracks across the record, it is important that the stylus remain tangent to the groove. Setting overhang we are aligning the cartridge to follow that ideal arc across the record. In a radial tracking tonearm, there are only a couple of points when it actually is tangent (null points).  Without getting overly bogged down in technicalities, there are at least a couple of theories about where the null points should be, and so some gauges are slightly different than others depending on which the 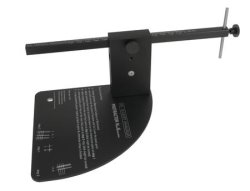 To set overhang, you'll need an alignment gauge. There are a number of overhang gauges available through the years (DB Systems, Denessen Soundtractor, Mobile Fidelity Geodisc, to name a few). People usually like the one they've used before, but even the simple template provided with your turntable or tonearm is useable. Our favorite, and the one we use here, is the precision tool from Dr. Feickert (pictured). It gives you the option to set overhang at one of the three most popular geometries - Baerwald, Stevenson, DIN, and Loefgren.

VTA or SRA: VTA is an abbreviation for vertical tracking angle, SRA stands for stylus rake angle. The two terms (while not exactly the same, technically speaking) are often used interchangeably to describe the relative angle of the stylus to the groove. This angle is normally adjusted by raising or lowering the back of the tonearm (although shims can be used between the headshell and cartridge).

Correct VTA/SRA is achieved when the angle of the playback stylus matches that of the cutting stylus used to make the original master lacquer. Because the angle of the record lathe cutter head (normally specified as twenty degrees, plus or minus five degrees) varies to some degree from manufacturer to manufacturer, we must adjust our VTA to achieve optimum playback results. Other variables such as record thickness, stylus shape, and variations in cartridge construction, also make VTA adjustment necessary. 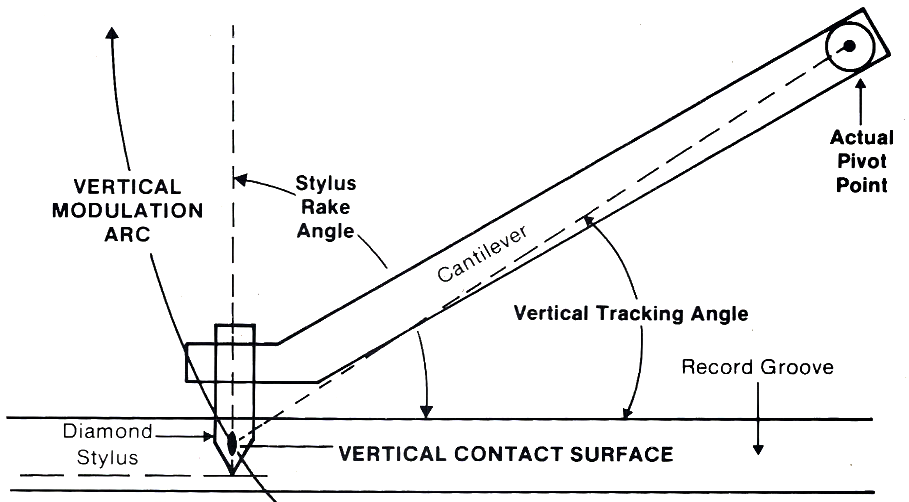 There are a couple of ways to set VTA/SRA. Using a digital microscope and measurement software allows very accurate adjustment to the oft referred to "ideal" setting of 92 degrees (Michael Fremer has an excellent tutorial here on employing this method). Some listeners feel the "correct" setting for VTA/SRA can only be determined through listening tests. One should start with the tonearm parallel to the record surface, raising and lowering the tonearm in small increments until the best setting is achieved (many listeners find that they end up with the rear of the arm very slightly lower). In looking for the "sweet spot," there are several things to listen for. Look for the point at which the soundstage comes into the best focus, providing maximum width and depth simultaneously. Additionally, surface noise is at a minimum and harmonics are well balanced. You will find (to a varying degree depending on the cartridge) a shift in tonality. Usually, a positive VTA results in an emphasized top-end, while lowering the setting toward negative will soften the high-end and increase the bass. Due to stylus shape and size, some cartridges will be more sensitive to VTA than others. Generally, the more radical the stylus cut, the more sensitive to proper adjustment of VTA. All cartridges, however, will benefit, at least to a degree, from proper VTA alignment.

It is important to note that vertical tracking force (VTF) is directly related to VTA. As tracking force is increased cantilever deflection increases, changing the relationship of the stylus to the groove. So fine-tune VTF before zeroing in on VTA.

Azimuth: Even more critical (in my opinion) to proper set-up than VTA, is cartridge azimuth. Unfortunately, VTA gets all the press, therefore many people are not aware of the importance of this adjustment. What is azimuth? Looking at the cartridge body from the front, it is the left-to-

right tilt of the cartridge body. Contrary to popular belief, azimuth is not necessarily correct with the sides of the cartridge body are perpendicular to the record surface. What we're actually looking for is the correct relationship of the stylus to the groove. Unfortunately, the vast majority of styli are not mounted perpendicular to the bottom of the cartridge body, thus making azimuth set-up by sight alone erroneous. And with the current trend toward decreasing stylus size, even seeing the stylus without the aid of magnification borders on the improbable. The "eyeball" or "mirror" method should only be employed if other more sophisticated methods are unavailable.

The gold standard for determining the correct azimuth is a dedicated cartridge analyzer or Fosgate Fozgometer from Musical Surroundings (pictured). A test tone (typically 1kHz) is played on one channel while the analyzer looks at the output from the opposite channel. This crosstalk is a measure of cartridge separation. When the crosstalk is at its lowest, and equal on both channels, the azimuth is optimized. If you can obtain a test record, an oscilloscope or accurate digital voltmeter can be substituted for the dedicated cartridge analyzer mentioned above.

Lacking the test equipment previously described, other less sophisticated methods may be employed to set azimuth. The simplest alternative, connect one channel of the cartridge out of phase with the other (simply reverse the + and - on one channel only) and play a test record with a mono track or a monophonic record (preferably one with simple instrumentation). Out of phase information cancels so adjust azimuth by tuning for least output.

From Harry Weisfeld at VPI comes yet another rather simple method, requiring only a mono record and a pair of ears. He suggests that a simple mono recording of voice should provide a stable, non-wavering image, precisely centered between the two speakers. Adjust the azimuth to achieve optimum results. This method works well if you’re practiced enough to know what to listen for, though most listeners would be better served by using one of the tests outlined previously. The best option would be to use use the Fozgometer.

From a mechanical standpoint, adjusting azimuth on some tonearms may be difficult. Some manufacturers (e.g. SME, Rega), in their unbending quest for maximum rigidity, have eliminated azimuth adjustments altogether. In most cases, this doesn't mean that you are stuck with an improperly aligned cartridge, but it does mean that your task is a bit more formidable. Arms lacking these adjustments must be shimmed at the base (or the cartridge adjusted with washers) to achieve accurate azimuth. It's a pain, but worth the effort.

Note: The SME IV, IV-Vi, and V do not have dedicated azimuth adjustments, but their azimuth can be changed (by a small amount). Simply loosen the two base locking screws and, by firmly grasping the bearing housing at the back of the tonearm, you can shift the arm left-right a few degrees. While this is not a wide range of adjustment, it will be enough to correct for any minor cartridge deficiencies. Re-tightening the base locking screws will lock in the adjustments. REGA tonearms do not have adjustable VTA.

Zenith: Aligning the stylus within the groove in the horizontal plane dials in zenith. Looking down on the cartridge from above, the zenith is changed by rotating the cartridge (as if around a clock face). Of course, there is only a very small amount of adjustment possible on most arms, just the play in the mounting screws.

Zenith is best adjusted using test equipment, but one can  (assuming the stylus is correctly mounted to the cantilever) also adjust by eye using an overhang gauge with an alignment grid. Simply sight down the cantilever from the front, aligning it with the line directly below it on the gauge.

Anti Skate Bias: Tonearm geometry creates a force that pulls the cartridge toward the center of the record. Anti skate bias counteracts that force, seeking to equalize the pressure of the stylus on both sides of the grooves. Just how to set anti-skate is somewhat of a controversy.

Some suggest using a grooveless record, but Sumiko disagrees stressing that skating is a dynamic force and using a blank or grooveless disc will result in overcompensation.

Another method suggests lowering the stylus into the groove while watching from the front to see if the cartridge has a tendency to move inward or outward, then adjusting anti-skate until there is no perceived motion.

It would be difficult to overstress the importance of proper cartridge alignment. If you expect to get all the performance promised by your costly investment in analog, these adjustments simply must be made. So please take the time to ensure that your arm/cartridge combination is properly set-up. The number of dealers with a good analog background is small. Hopefully, you have a good one in your area. If not it pays to learn the ropes yourself to ensure that it has been done correctly. Your investment in time will pay off with the reward of better sound and improved stylus and record life.

Note: More information on cartridge set-up is available in our article Turntable Set-Up

A downloadable PDF that offers a very detailed description of VTA/SRA.