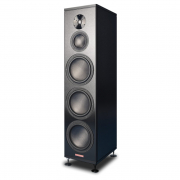 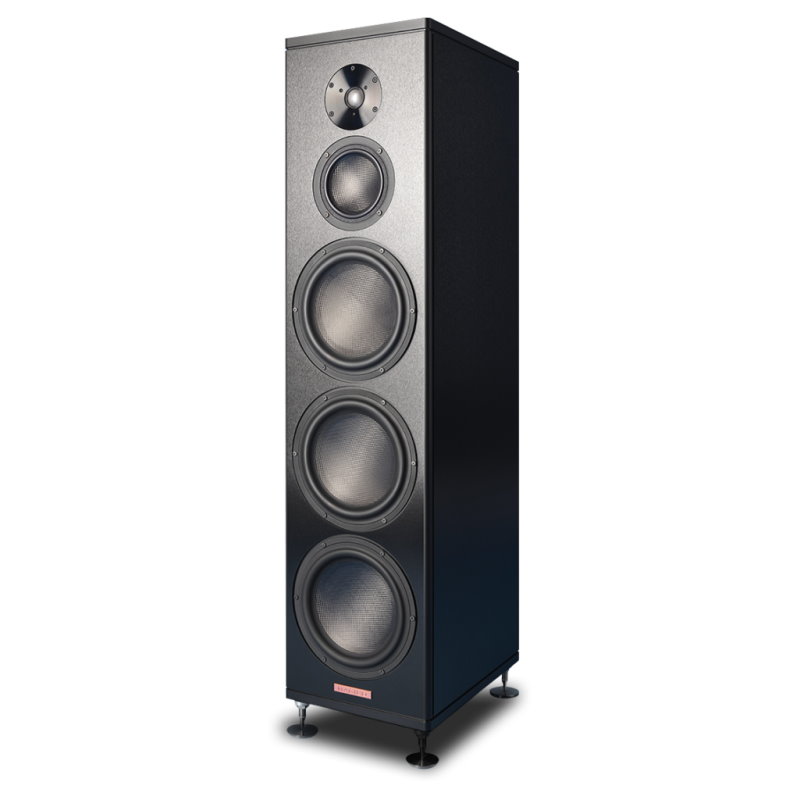 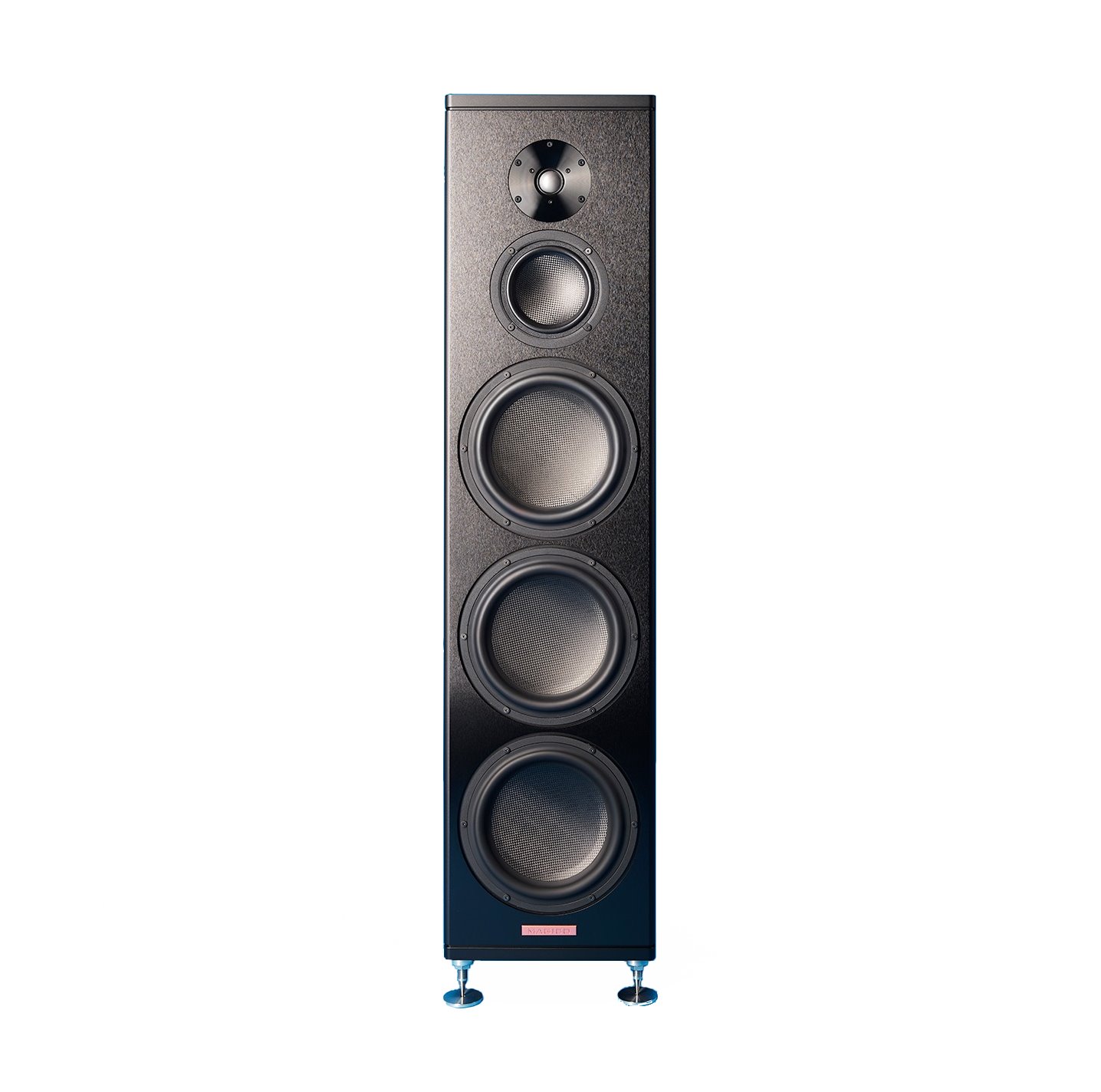 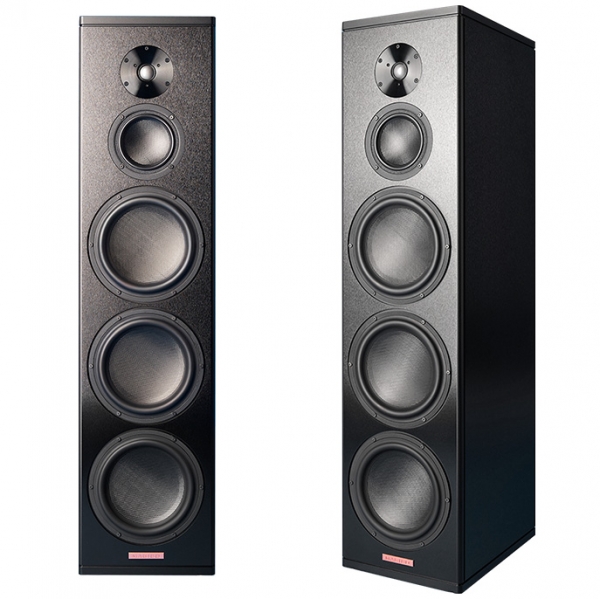 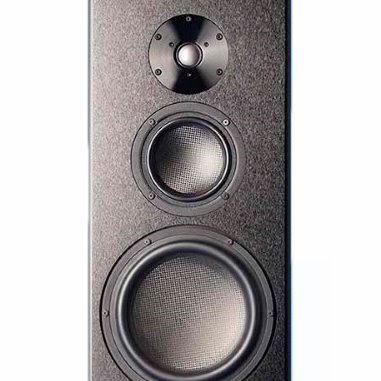 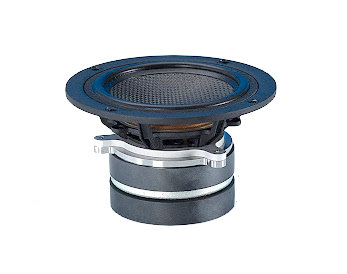 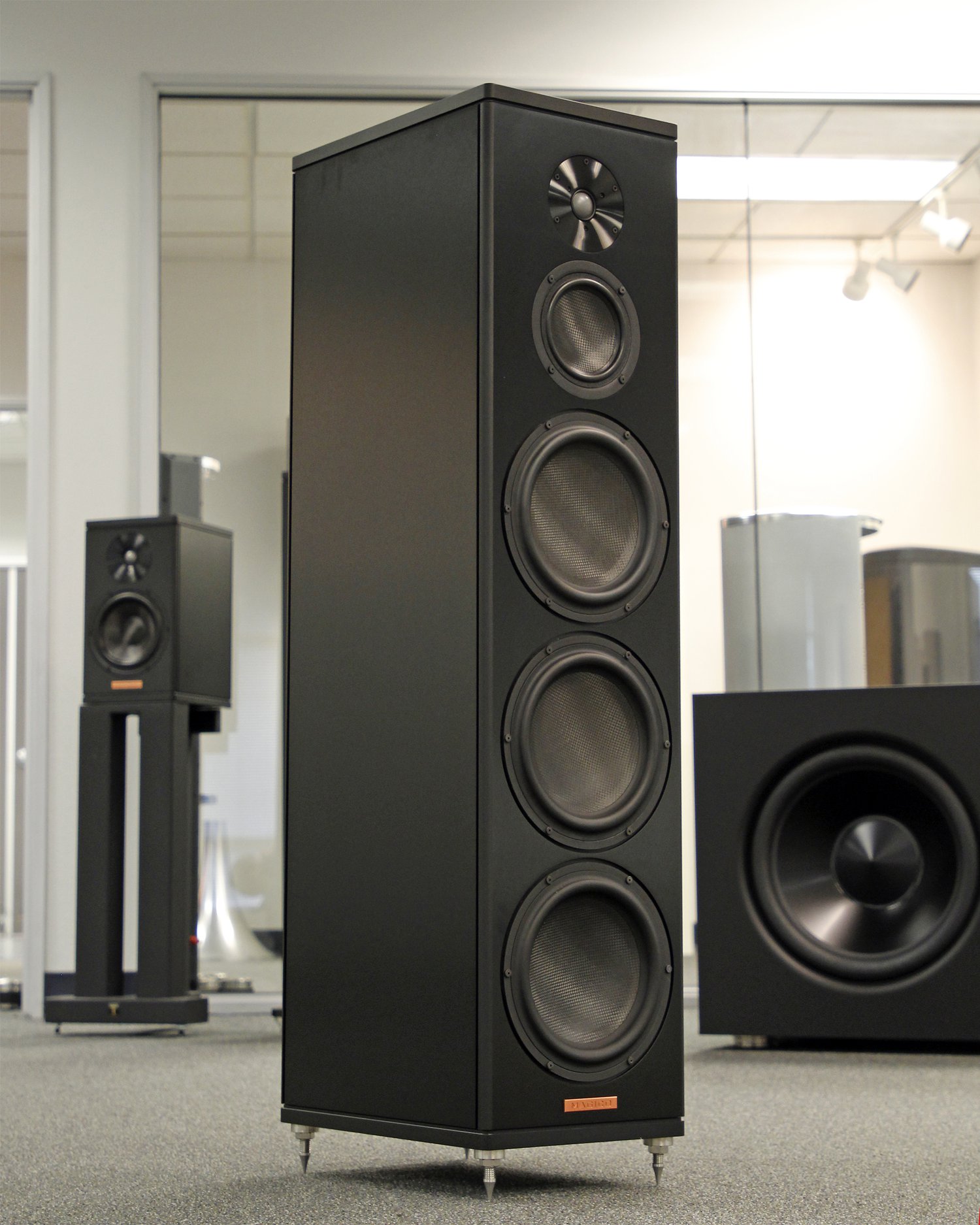 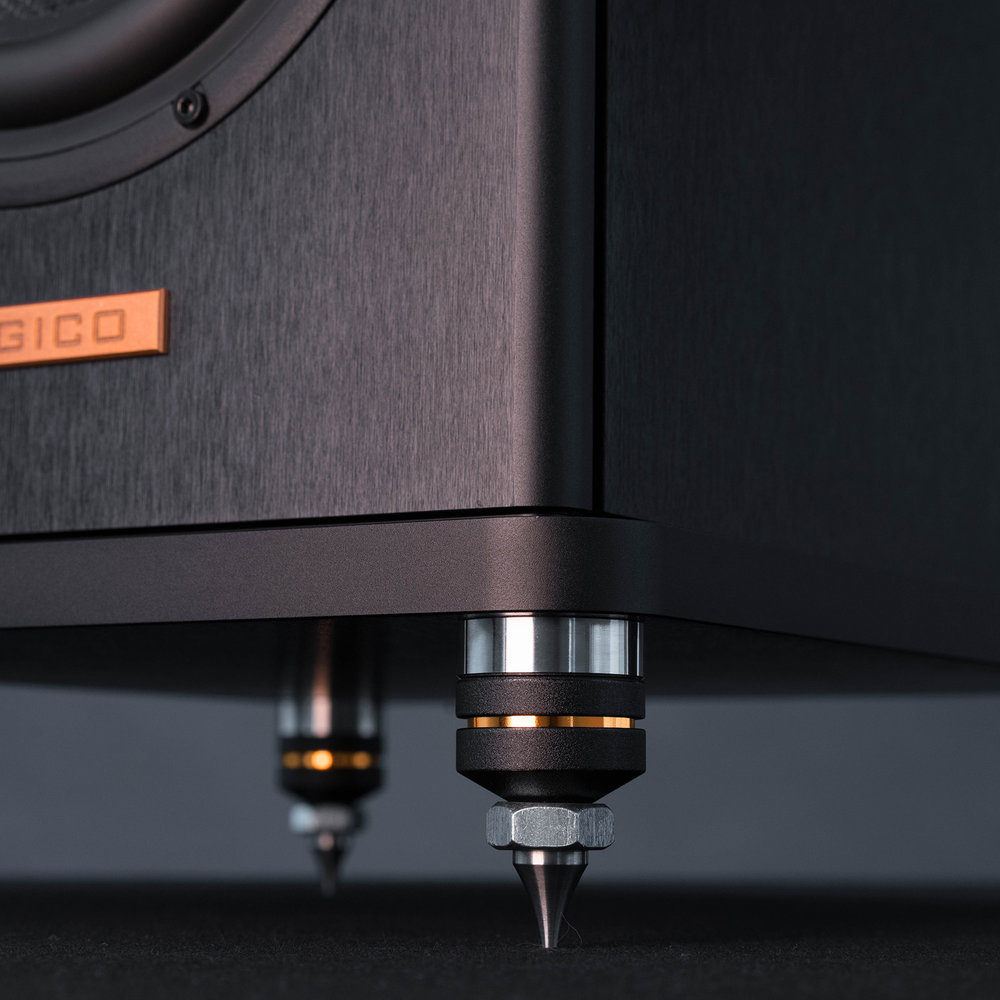 MY TAKE: MAGICO loudspeakers employ an impressive array of esoteric materials and manufacturing processes to craft speakers that are both incredibly accurate and immensely engaging on an emotional level. I have yet to hear a speaker that captures more of the subtly and nuance of the recording while at the same time conveying the intent and emotion of the music. Simply put, MAGICO speakers communicate the musical event without the addition or subtraction of information – exactly what a speaker should do. - Galen Carol

The largest and most advanced of Magico’s A Series, the A5 incorporates the company’s first 5-inch pure midrange driver as well as enhanced midrange and bass driver cone technology. These new cones achieve unprecedented stiffness-to-weight ratio, a key parameter that Magico has pursued over the past 15 years. In addition, the crossover debuts Mundorf’s new M-Resist Ultra foil resistors for unmatched transparency, liquidity, and power handling. “The A Series has been a great success in reaching a wider audience,” said Magico’s founder, Alon Wolf. “The A5 builds on that success with a new 5-inch midrange of extraordinary musicality. And the A5 ‘plays larger,’ with powerfully extended dynamic range.” The three-way, five-driver floor-standing speaker retains such Magico hallmarks as extensively cross-braced 6061 aircraft-grade aluminum and Elliptical Symmetry Crossover.

Based on the fundamental design platform and geometry of the M-Series tweeters and shared with the other members of the A-Series, the tweeter incorporates a pure beryllium-diaphragm with an optimized 28-mm dome. Magico encases the customized neodymium motor system in an engineered back chamber with the company’s most advanced damping materials. This enables ultra-low distortion, high power handling, massive dynamic capabilities, and extended linear voice coil movement.

Magico acoustically integrates all five drivers with the proprietary Elliptical Symmetry Crossover topology built with state-of-the-art components from Mundorf EB Gmbh of Cologne, Germany. The A5 will be the first product in the world to offer Mundorf’s new M-Resist Ultra foil resistors. Now perfected after years of development, the new resistors deliver greater power handling, transparency, and liquidity. The 3-way network features a 24 dB per octave Linkwitz-Riley filter that maximizes frequency bandwidth while preserving phase linearity and minimizing intermodulation distortion.

Weighing in at 180 pounds each, the A5 features a massive, sealed enclosure machined entirely of 6061-T6 aircraft-grade aluminum, the same material and construction methods as in Magico’s acclaimed Q-Series. Complex internal bracing helps stiffen the entire enclosure and minimize resonance. A dedicated sub-enclosure houses the midrange driver, protecting it from the extensive back wave energy of the bass drivers. The aluminum has an elegant, brushed black anodized finish.

The Absolute Sound - Editor's Choice Award: "The A5’s overall presentation is triumphantly cohesive. This, combined with the simple but meticulous enclosure design (and probably what’s happening in that crossover), creates a soundstage that defines itself by how it was recorded, rather than by measurements or room boundaries. The scale of dynamics, sense of mass, and boundless presentation are staggering considering the overall size (and price) of the A5. Image accuracy and presence are meticulous, as expected, and set within a stage representing the best of omnis. I actually wrote the phrase, “presence meisters,” in my notes, as the speakers simply vanished. Vocal identification was meticulous, as I was aware of each performer and his or her aura—that sonic presence around him or her that helps to define where they are, where they are not, and what they are there to accomplish. At times, I felt as if I could walk onto the stage and around the performers. I am convinced that the A5s thrived, in my room particularly, as a result of my extensive room treatments and my amplifier’s limitless power and damping. The overall design of the speaker lends itself to the benefits of good sidewall diffusion, and I strongly suggest that you do as much as you can to make your room sound the best it can possibly sound. And, with their 88dB sensitivity, don’t even think about powering these speakers with anything other than superior-quality equipment with power to spare.

"The whole comes together to represent what could be considered a turning point in the ratio of price to performance. Alon himself admitted, when pushed, that the A5 is priced too low, although I was certain I detected a Cheshire Cat grin on his face over the phone when he said it. This speaker offers a beautifully balanced, rich, textured and yet meticulously accurate presentation. You can seemingly measure the attack and decay in the recording to within one-ten-thousandth of an inch. And micro- and macro-dynamics are totally unconstrained. You can almost hear the technology—the differences it makes are so dramatic at times.

"Do not misinterpret my exuberance; my implication is not that this speaker should be considered in lieu of $35–$50k models. Only that it may provide what you are looking for without the need to spend that much. What you get in the end is rich, pleasant, and oh so expressive, with exceptional finesse and elegance given its price." - Matthew Clot

Soundstage!: "I was struck from the get-go by a number of aspects of the A5s’ performance. Immediately, you’ll notice that tweeter is something rather special. The resolution, detail and dynamic expression of this beryllium driver is outstanding. With that comes an uncanny ability for the A5s to disappear while projecting an expansive soundfield populated with sharply-focused images which are spread wide across the room’s width, depth and height.

"The A5s’ efforts at providing the listener with profound levels of detail and separation (resolution) make it anything but the shrinking violet while never being objectionably forward sounding. You’ll hear everything that is in the grooves, pits, ones and zeros, whatever. However, never do the A5s become brash or etched – and worse, certainly never harsh – they just excel at communicating what is in the recording in an entirely listenable way. If the production is lack-lustre, you’ll hear that too but, hey, don’t shoot the messenger. If the recording is great, or even merely good, boy you’re in for a treat.

"The new A5 may be the range-topper from Magico’s entry point ‘A’ series but there’s nothing entry-level about this extraordinary loudspeaker (or its series’ siblings for that matter). Its tweeter is derived from the company’s über loudspeakers while the midrange and bass drivers are brand new designs employing advanced materials and refined technologies worthy of statement products. The cabinet construction, along with the fit-and-finish, is exemplary and, again, would befit the very best in high-end audio. But the A5 is not just a systematic assembly of outstanding elements – it intelligently sums its parts in order to realise a greater whole (the fine-tuned crossover playing a big part here). It’s the expression of highly skilled engineers and designers with a team focus and a clarity of purpose fulfilled by the A5’s capability to offer tonally accurate, powerfully dynamic, realistically immediate, precisely resolute and thoroughly enjoyable music.

"The A5 is a proclamation, a statement, with as potent a message as Magico’s own flagship M6, or the soon-to-be-launched M9. It’s a narrative conveying a powerful company ethos: Magico’s products are no compromise – at any price."… Edgar Kramer