WAY DOWN DEEP - ADDING A SUBWOOFER


Most speaker systems, even some considered “full range” designs, are not capable of reproducing the lowest recorded frequencies, and in many cases miss more than just the bottom octave. While low bass may not be something that you feel is critical to your enjoyment of music, I think you’d be surprised to learn that it’s not just “more bass” that a subwoofer can offer.

For most listeners, reproducing the full range of recorded musical instruments is important. While giving up the 16Hz fundamental of a massive pipe organ may not be crucial, faithfully recreating the foundation of more common instruments certainly is. A bass guitar or acoustic bass, kick drum, kettle drum or orchestral bass drum are all important and deserve full frequency representation. Larger (and in some cases very expensive) speakers may adequately reproduce a convincing portrayal of lower tones, but most speakers lack extension and power to fully convey the scale and weight of these instruments.

In years past, when LPs were king, the medium restricted low frequencies. Cutting master lacquers required careful planning so as not to exceed the limitations of the process. Concerns mainly focused 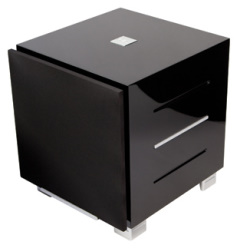 on restricting low frequencies and or levels to accommodate requirements dictated by the length of the program material. Today’s music, recorded digitally, is not subject to those same limitations, so artists and engineers are free to explore the lower octaves.

Extended low frequency capability not only insures faithful reproduction of instrumental timbre, but just as importantly allows the system to convey the power and scale of music. The lower octaves contain the visceral impact and weight that let’s one “feel” the music. We’re not talking here about shear volume; this is more about a sense of weight and power that convey the energy and emotion of music. The ability of the speaker system to “pressurize the room” at the low frequencies imparts that sense of scale.

An often overlooked or unknown advantage offered by subwoofers is their positive contribution to soundstaging. It may be surprising to some that adding subwoofers can dramatically expand and enhance dimensional recreation, but anyone who has tried it knows that indeed they do, and often dramatically so. Why is this? There are a couple of answers; one has to do with recreating the subsonic cues in recordings that convey size and dimension of the original venue. This aspect was highlighted for me years ago during a demonstration at CES by a well respected speaker manufacturer who was introducing a new subwoofer. But rather than wow the audience with bombastic material, he played a recording of a piano and violin duo – not material most would use to spotlight a subwoofer, but this demo was intended to show the unexpected benefits of adding a subwoofer.

The demo was configured so that the sub could be switch on and off without interrupting the music. When the subwoofer was engaged, collective jaws dropped as the soundstage grew exponentially, with no increase in apparent bass. It was explained that the subwoofer was recreating the subsonic information in this recording that defined the size of the recording venue, and what a job it did! The performance went from sounding like the players were on a small stage - with the subwoofer out of the signal chain - to easily hearing the stage was located in a large auditorium - when the sub was engaged. Very impressive.

The soundstage effect can be generated, to a degree, with one subwoofer, but two subwoofers dramatically magnifies the benefit. There are other reasons for stereo subs as well. First is that one hears more accurate localization of instruments. The kettle drums placed in back of the orchestra to one side or s stand up bass located far stage left are more accurately portrayed with a stereo pair of subwoofers. Some may argue that low frequencies (being large waveforms) and less localized, and this is true to a degree, but I think mainly for very, very low frequencies. For the lowest ranges of common instruments, we can indeed easily perceive their location.

Another advantage is that two subwoofers more evenly and effectively pressurize the room. Not only will bass be smoother (fewer peaks and dips) but you also increase the sense of scale. In fact, some listeners take that concept further by employing more than two subwoofers. While this may be overkill for most, it underscores the fact that having multiple subwoofers is a plus.

Now that your interest in adding a sub or two has been piqued, we’ll look at some important considerations in selecting the correct one. First and foremost is quality over quantity. There are a no end of subwoofers on the market and some are just fine for reproducing explosions or other effects in motion pictures, but fall flat when tasked with reproducing the timbre and tuning of musical instruments. Music requires much more than just sheer energy or impact, so the choice of a subwoofer for an audiophile will likely differ from one chosen strictly for home theater duty. The prime concern in a music environment is the ability of the subwoofer to communicate the timbre and tone of the lower ranges. Now that’s not to say that a subwoofer can’t satisfy both requirements, in fact all the subwoofers we recommend for music systems are also capable of fulfilling both roles. But if music is the goal, choose wisely.

The next attribute required of a subwoofer intended primarily for music rerproduction is speed. The sharp attack or leading edge of a transient is important not only in conveying the character of an instrument but it is key to integrating the subwoofer with the main speakers. A subwoofer should not call attention to itself; one should not be able to tell there is a separate speaker reproducing the low frequencies. A seamless transition between the main speakers and the subwoofer is paramount to achieving that goal. To pull it off, the subwoofer must be able to match the speed of the main speakers (and be properly placed and dialed-in, but that’s the subject of another article). The ability of the sub to start and stop (accurately reproducing a musical transient) in lock step with the main speakers is important. Granted, the cone drivers used in a subwoofer will not be as fast as a planar diaphragm, but “faster” subwoofers can indeed be seamlessly mated to those types of transducers.

The sonic benefits of adding subwoofers to most any system can be startling. The ability to accurately reproduce the lowest ranges of all types of music in addition to the enhanced dimensionality bring newfound listening pleasure and will have you listening anew to your entire library for all that you’ve been missing!