Selecting the proper antenna is crucial to achieving optimum performance from your tuner. What follows is an excellent primer from the the users manual for the superb Day Sequerra Reference Tuner (now discontinued)

The selection and installation of an appropriate FM antenna is arguably the most important aspect of receiving high quality FM broadcasts. No single antenna type, whether indoor or outdoor, is perfect for all receiving situations.

The intent of this overview is to aid in the selection of an FM antenna that best suits your receiving location. The next few paragraphs describe the types of readily available FM receiving antennas.

Even though a common outdoor television antenna may, in a few instances, provide acceptable results, antennas specifically designed to receive the FM broadcast band, generally 88 MHz to 108 MHz, are the most effective for FM reception. The FM broadcast signal is VHF (very high frequency) in nature and generally can only be received within a distance known as "line of sight"... about 40 miles.

Without hills, mountains, or buildings to impede its progress, an FM phenomenon commonly known as "diffraction" causes the FM broadcast signal to conform to the curvature of the earth for a distance of approximately 30 miles beyond normal line of sight. It is this phenomenon that provides for long distance or "fringe reception" of the FM broadcast signal. Fringe reception can usually provide a listenable FM signal, although it is often noisy and of low audio quality.

FM interference problems will occur more often as the distance between the transmitting and receiving antennas increases. Tropospheric scatter causes part of the FM transmissions to be refracted toward the earth at some distance within the normal line of sight. This transient phenomenon may occur, for example, when a temperature inversion is located in the FM broadcast signal path. Such signal refraction can create FM reception where there was none before, but it can also disrupt reception of a high quality local FM broadcast transmission.

Obstructions to an FM broadcast signal can range from small hills and buildings to office towers and mountains. The resultant effects could be partial absorption, which lowers received signal strength, or reflection. This causes the desired line of sight FM signal to be received along with reflected out-of-phase, time distorted signals. This "multipath interference" distorts the FM signal resulting very often in low fidelity reception.

Other sources of interference affecting audio quality of the FM signal include co-channel and adjacent channel interference as well as "noise flutter" (e.g. modulation interference caused by aircraft).

As a general rule, an outdoor FM receiving antenna that has many elements can be assumed to be highly directional. That is, it will be more sensitive to FM signals received perpendicular to its active elements than to signals arriving from other angles or even in the opposite direction. Such directionality is desirable in an outdoor FM antenna for mainly two reasons: Antennas that are highly directional usually have higher gain. Antenna gain will provide increased signal strength when receiving a transmitted FM signal. When referring to an FM antenna, gain is most often referenced to a standard half-wave dipole, such as a simple flat twin-lead antenna. For example, an FM antenna with an advertised gain of 3 dB will deliver to your FM Reference approximately twice the power compared to a standard half-wave dipole.

A directional antenna will receive only those stations within the defined antenna beamwidth. Antenna beamwidth is the general measure of the amount of directionality and is defined by the half power points (-3 dB) of the angle of the front radiation hemisphere. If the angle is too great (wide an 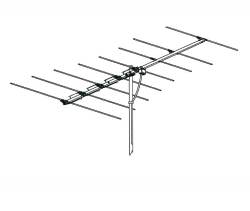 An omnidirectional antenna, although much lower in gain and lacking any significant directionality, may prove to be adequate in a few applications. For example, if you live in an area which is relatively free of multipath problems and receives strong signals from many directions, a low-cost omnidirectional outdoor antenna may suffice.

Of the outdoor FM broadcast receiving antennas available, the following are most common:

Unidirectional Dipole - This is a large dipole having two elements and slightly more gain than the common indoor twin lead dipole. It concentrates its signal reception mostly in one direction. This type of antenna could be used where the desired stations are in one general direction and within about 20 miles.

Turnstile (crossed dipole) - This antenna attempts to provide an omnidirectional receive pattern, without the need for rotating the antenna. Unfortunately, this type of antenna has relatively low gain (about -3 dB) in all planes.

Multi-element Array - This is a unidirectional antenna capable of receiving very distant stations due to its high gain. However, this gain is directional and may in some cases require that the antenna be rotated each time you tune to a station (usually using an antenna rotator system). A good quality antenna of this type, mounted high on a mast in most suburban and rural installations, should provide you with the best FM reception possible. Yagis, collinears, and log periodics are the most common of these high-efficiency, multi-element array types.

For urban, near-suburban or in other situations where an outdoor antenna installation is not possible or desirable, a high-quality indoor FM antenna should provide excellent reception.

It should be noted that the urban FM receiving location poses a totally different set of problems than that of a suburban or fringe reception installation.

The radio frequency environment in and around modern metropolitan areas is jam-packed with voice and data transmissions, over modulated broadcasts, FM multipath, and out-of-band spurious interference, all competing for valuable airspace...spilling over and interfering with your favorite FM radio station.

Because the L-R portion of the FM stereo broadcast signal is more easily affected by this RFI and multipath than the L+R portion, stereo reception of even a very strong local FM station might be noisy and distorted, while monophonic reception of the same station is clean and clear.

To complicate matters, multipath signals in an FM urban environment are generally received from almost the same direction (in the horizontal plane); even a directional outdoor antenna with its horizontal angular discrimination is often incapable of separating the desired direct path signal from this vertically oriented multipath interference.

Most amplified antenna designs have inherent tradeoffs in signal-to-noise as well as other negative RF attributes that tend to exacerbate the difficult receiving conditions in the urban RF environment. The greatly increased FM noise floor caused by the amplified antenna degrades the real world sensitivity of the tuner.

There are two basic antenna configurations generally used in unamplified indoor antennas, both are dipoles.

Bidirectional Dipole - This is perhaps the most commonly-used indoor FM antenna. The single, 1/2 wave, dipole design exists as an industry gain reference (O dB) for most FM broadcast band antennas. The crudest form of a dipole is the "ribbon dipole" found packed with most FM tuners and receivers.

1/2 Wave Vertical - A 1/2 wave vertical design features relatively high gain for an indoor antenna, approximately twice the gain of the bidirectional dipole. The 1/2 wave vertical dipole is probably the antenna of choice for high quality FM reception in an urban environment.

Cable FM Service -
In most cases, cable FM (provided with some cable television services) is distinctly inferior in the areas of signal-to-noise, cross-talk and RF intermodulation distortion when compared to a properly installed FM antenna, whether indoor or outdoor.

Our Notes: In general, we have found that good performance in most areas can be achieved with the use of the simple folded dipole antenna that is included with most tuners. The specific characteristics associated with your area will determine whether you need to take more drastic measures. A multi-element outdoor antenna on a rotor is usually the best answer, but in many cases not a viable option. The next best bet is the Magnum-Dynalab ST-2 half wave omnidirectional antenna, which can be mounted outdoors or in an attic. A very practical option in many situations.

Some interesting technical information and measurements of various antennae