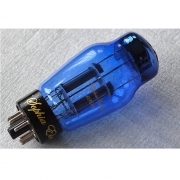 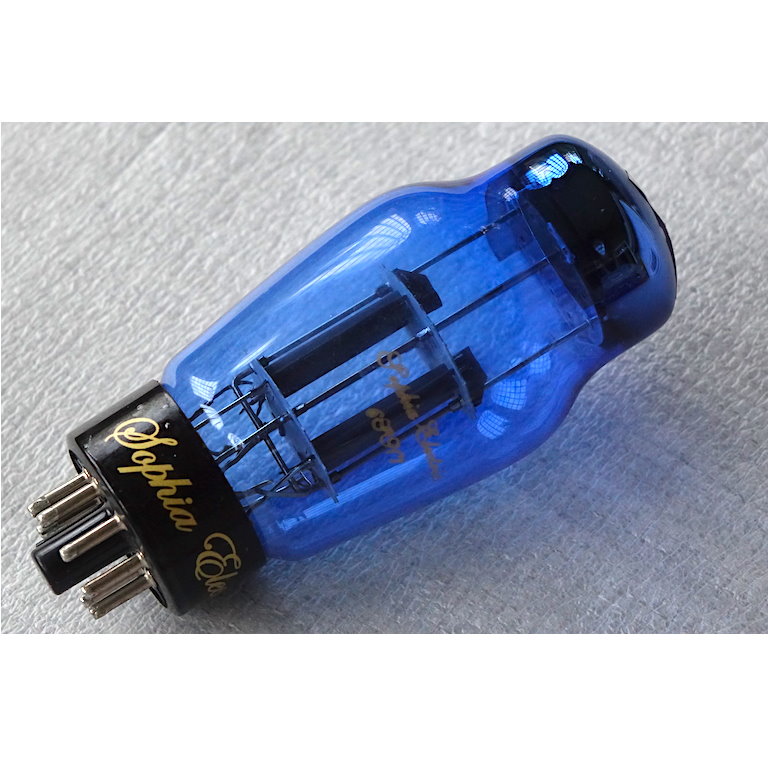 NOTE: As of 1/20/2021 the Blue Glass 6SN7 is on backorder and not expected for quite some time. Please check back later

MY TAKE: This may be the best 6SN7 available today, anywhere at any price - many Audiophiles believe the Sophia 6SN7 outperforms even the very best vintage NOS 6SN7! Listeners report more openness better clarity and lower distortion compared with their favorite vintage brands. - Galen Carol

This new blue glass 6SN7 has rich tonality and big sound stage, the new 6SN7 is a great choice to replace vintage 6SN7 tubes in all tube pre-amplifier and tube amplifiers.

"I have been using RCA Orange Letter, Black Plate 1967 6SN7GTB's in my Ming Da MC 300 PRE, coupled with a PARASOUND A23 Amp and Sliverline Prelude Plus Speakers and an Oppo UDP-205 Audiophile player with Dual Flagship Sabre DAC'S.

"Well let me say, the RCA's are sitting in their boxes again! Now on to the Sophia Electric 6SN7's: The sound stage, dynamic range, depth, rich, detailed, musical, full-bodied Sophia 6SN7's blow the RCA's all to pieces!

"These Sophia's render spot on, tight, clear, smooth, resounding bass,. Truly phenomenal mid-range that shine with any vocalist like none I have ever heard before. The highs, well they sparkle, twinkle and float about the room like angels!

"I just received these today, and have been playing them for only four hours! After burn-in, I will have to purchase racing harness seat belts to listen to them! Fingers leaving the strings, breathe, blackness and real life seated in front of you musicality and realism is unsurpassed in my experience!

"When I put in the Sophia Aqua Blue 274 Rectifier Tube, I did not think it could get any better, such a magic tube as well!

"You have hit a home run selling and promoting these tubes! Worth every single red cent and then some!" J.L.

"They simply take every aspect of the musical performance up a considerable notch! Highly recommended" - ! Dan Wright, ModWright Instruments

"Galen, Just a note to tell you how much I appreciate your advice to buy the Sophia 6SN7 tubes for my Cary SLI-80 amp. In two weeks I've gone from a cheap Chinese 6SN7 to greatly improved Sylvania NOS tubes, to staggeringly open and articulate Sophia 6SN7 tubes. I can't wait for the Sophias to get burned in and open up even further. Given this experience, I'm sure I'll be back to you soon to buy a matched quad of Sophia KT-88s. Thanks again for sharing your tube wisdom with me." J.A.

"Galen, I placed the Sophia’s in the Atma-Sphere preamp and immediately knew it was a special tube. I am near a 100 hours of break-in and I’ve notice the tube became smoother and with more texture around instruments. The bass response and dynamics are as good as any tube I’ve tried in my system but with clarity superior to most tube I’ve used. These tubes are winners and I will add more when my Atma-Sphere amps arrives." - G.B.

"My local audio shop got me interested in 'tube rolling' a year or two back.  Over that time I've acquired a nice little collection of some pretty darn good tubes... Mullard, CBS, Zalytron, Zenith, Sylvania, RCA, Heintz & Kaufman, Adzam, and such.  The red base RCA's and H&K's had won the job and found a permanent home in my amp.

Then you suggested the Sophias.  And now there's a new top dog around here.  The Sophias are absolutely glorious... in every aspect and measure.  I consider musicality their top quality.  I define musicality as 'being lifelike'.  There's not hint of reproduction.  The Sophias deliver natural, authentic, 'there-in-person' musical magic.  You can hear fingers lift off bass strings, the ring of a mid-bass drum, piano dampers landing on the soundboard.  The ringing of notes, the metallic twang of guitar strings... all of it.  It's all there, with a richness and

Every time I upgrade or add a new component I go through my library of favorite releases and experience new sounds and feelings I'd missed before.  The magnitude of change offers a measure of small to big upgrade.  The Sophias are a major upgrade... OK... now consider price... they are a very major upgrade.

Look... I'm just getting started... soundstage... miles wide!  Imaging... I have an MFSL Renaissance release where in one of the tracks the xylophone is at the left side of the stage, and you can tell it's oriented front-to-back on the stage.  High to low notes are close and farther away.  On other releases the piano is here, and the bass there... and the drummer is behind the vocals.  You can so easily pick out an instrument and focus on its performance.
Detail... a squeaking piano bench... a band member clearing their throat... but that's part of a live performance.  Wind, air, and space... range, tonality.  Speed... I would say the Sophias are a slower tube, but that might be an illusion of their detail.  Superb vocals... and on and on.

The goal I set in all of this is to be inside the studio, experiencing to a private audition.  The Sophias take me there.
Fabulous suggestion !!!" Thank you! -B.M.


"After some research I decided to try NOS RCA, NOS Sylvania, Synergy Hi-Fi, (Shuguang) Black Treasures and Sophia Electric 6SN7's. I found the Sophia's to be clearly the best in terms of all around performance. Bottom line, to my ears the Sophia's sound more like live music than the other tubes. They have excellent definition, a deep soundstage, great dynamics, accurate bass and a natural, organic sound like live music." - D.M.


"I bought six pieces of Sophia Electric 6SN7 tubes ten days ago. These coke bottle 6SN7 tubes are the best 6SN7s I have ever heard. The sound is PURE, transparent and it is 3-D with stability." - J.C.


"Anyone who owns tube equipment requiring 6SN7 tubes, definitely should try these incredible Sophia Electric 6SN7 tubes. They owe themselves to hear the very best 6SN7 from Sophia Electric." - G.C.


"Recently I made an order of two Sophia Electric Princess 274B rigid plate and two Sophia Electric 6SN7 tubes and the change was....simply wonderfullllllllllll!!! The general stage grows more and more in all directions....the roundness, smoothness, 3d, extended bass in the music texture is really amazing!!! There is not any sign of harshness in anyway... Every note sounds like pure silk." - D.S.


"These tubes are really awesome. I'm glad that you recommended them for the (ModWright) Sony mod. Anyone who has your mod should definitely get the Sophia tubes. They bring the musicians right into the room. I feel guilty for hearing a concert that I don't have to buy tickets for. Thanks again." - DD


"I have received the Sohpia 6SN7 tubes, and they are fabulous in my Modwright LS100 preamp! Many thanks." - WR

We offer only Sophia's best “A” graded tubes that are backed with a full one year warranty.