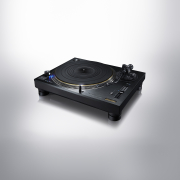 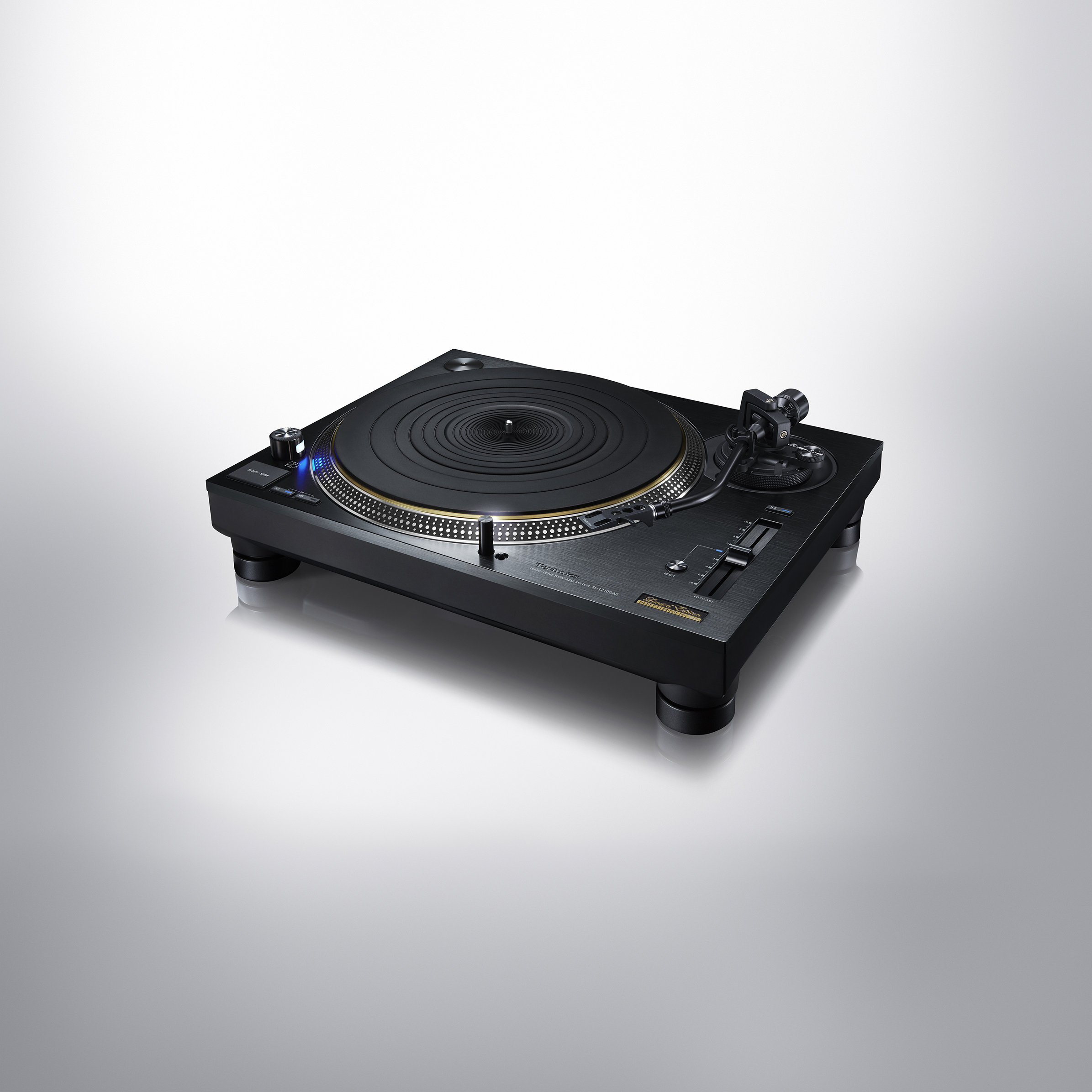 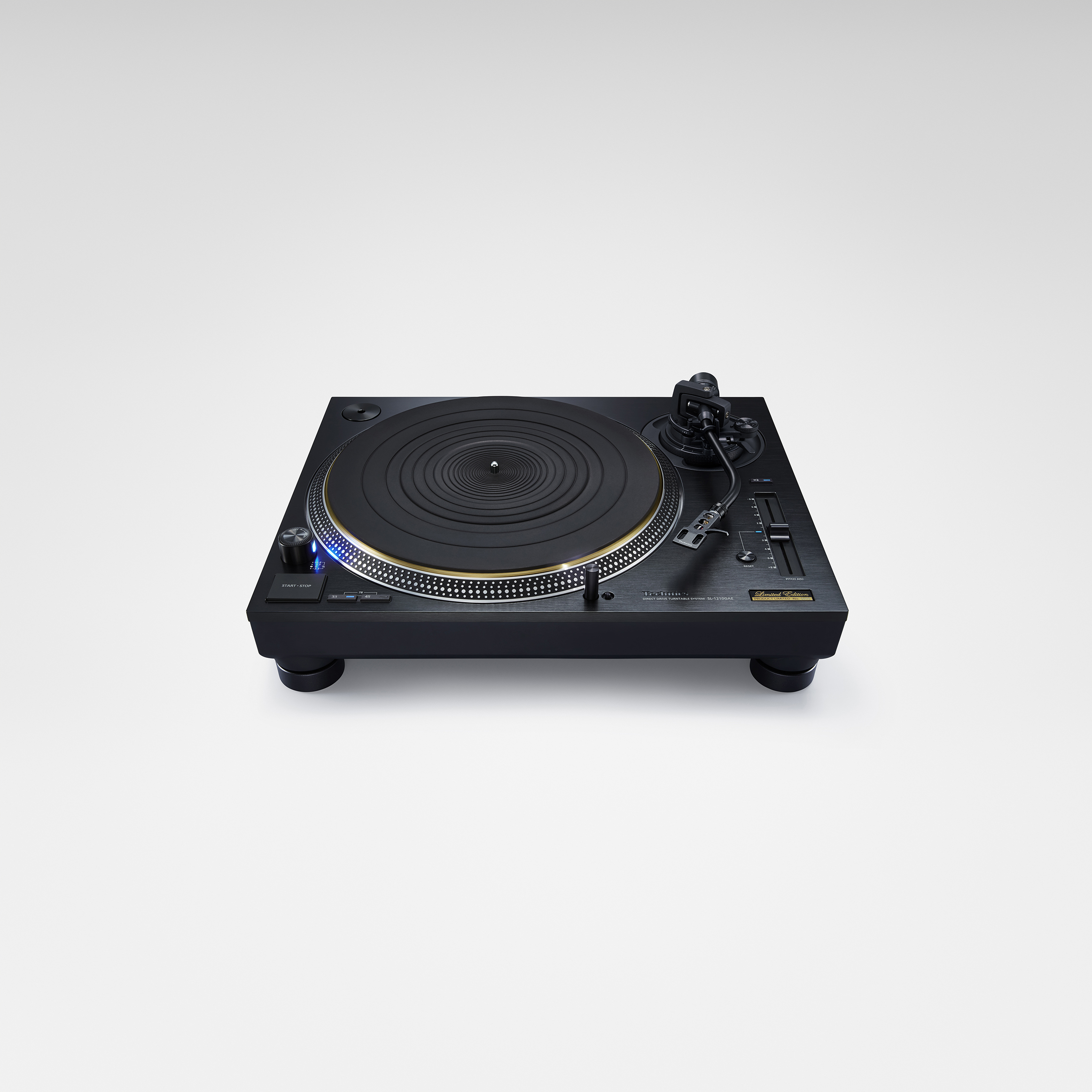 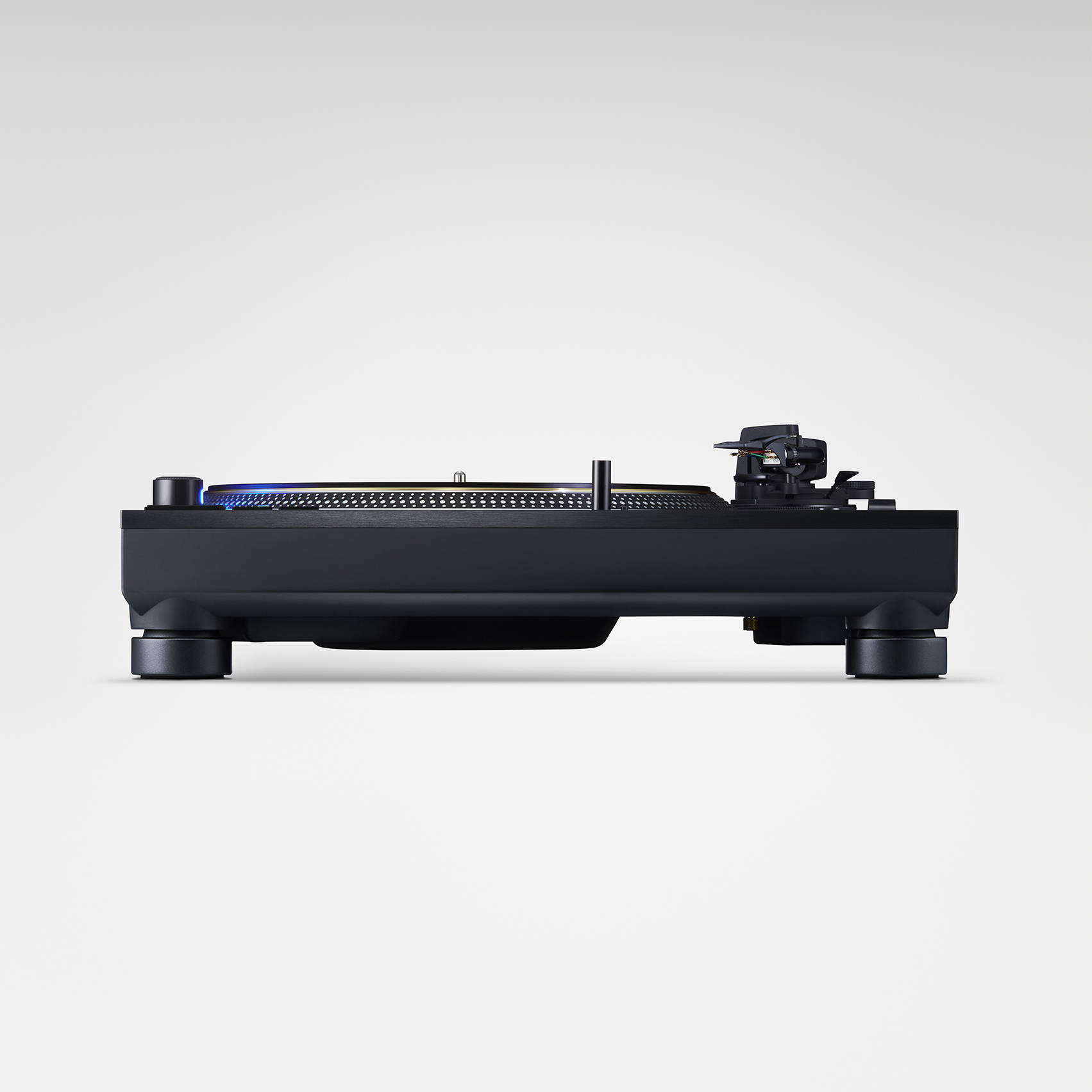 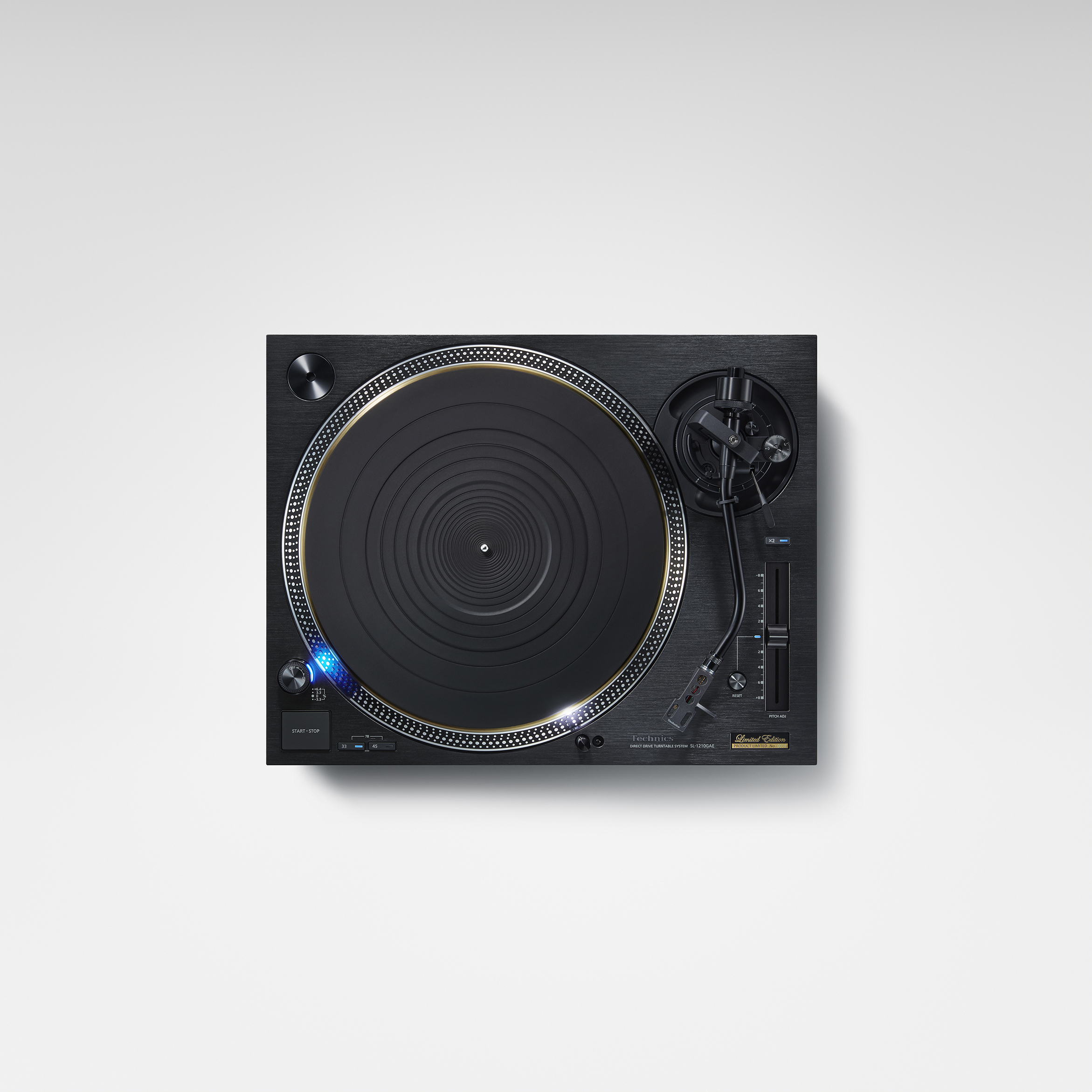 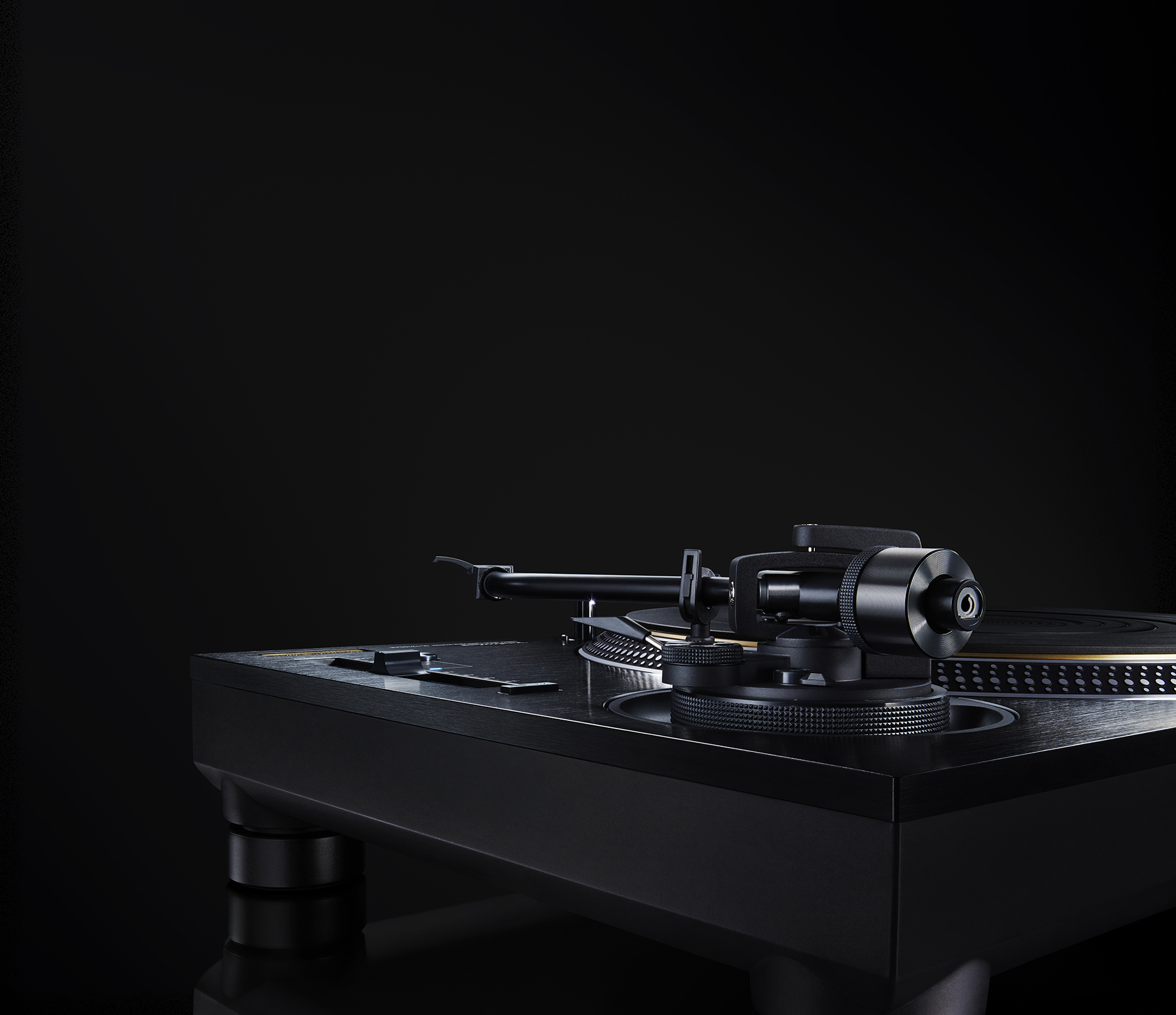 MY TAKE: Technics Announces the SL-1210GAE Limited Edition Direct Drive Turntable to Commemorate Its 55th Anniversary. Like the SL-1200GAE released previously, the SL-1210GAE is a stealthy, all-black commemorative edition. They will sell out quickly! - Galen Carol

$3999 with free shipping! Please call to order, no online sales of this model!

"The SL-1210GAE is a limited edition with most going to Europe so if you want one, grab it while it’s available" - Michael Fremer.

Customer Comment: "Just have to say the GAE is stunning. I thought the GR was solid, but this is on another level quality and sound-wise. Just beautiful. Quieter, more three dimensional, and much more detail in the sound. Pretty happy right now. Thanks!"

Technics has been delivering a wide variety of epoch-making audio products, such as speaker systems, amps, and audio players to worldwide markets since 1965, the year in which this valued Hi-Fi audio brand debuted. This year, Technics releases the SL-1210GAE Limited Edition direct-drive turntable to commemorate the 55th anniversary of the Technics brand. This special model is based on the internationally acclaimed Grand Class SL-1200G hi-fi turntable and features a full black color scheme, which has already proved popular with other recent Technics products. The SL-1210GAE will be available from June-July 2020 and limited to only 1,000 units will be sold in the world and only 300 coming to the US!

Special and exclusive specifications of the SL-1210GAE 55th-anniversary model -

Special badge inscribed with a serial number -
The SL-1210GAE is wholly made in Japan by skilled artisans’ hands, with a significant level of hand-made processes to ensure the highest quality possible. The top panel features a special badge, inscribed with the unique serial number to signify that it is a 55th-anniversary model.

Strobe light ON-OFF switch -
Turning off the strobe light allows the listener to concentrate more effectively on the music, especially in a dimmed environment.

Coreless Direct Drive Motor -
Conventional analog turntables have problems with degradation in sound quality caused by factors such as minute speed vibration during rotation and rotation irregularity called "cogging." In the SL-1210GAE, the use of a coreless direct-drive motor (with no iron core) eliminates cogging. Also, the twin-rotor construction reduces the bearing load whilst maintaining high torque, and also reduces minute vibration during rotation. These factors enable the reproduction of the warm, high-level detailed sound available from analog vinyl records.

High-Precision Motor Control Technology -
The application of motor control technology developed for Blu-ray devices, and switching the drive mode depending on the operational status of the motor achieves a high starting torque and high-speed stability for optimum playback.

High-level Balance Adjustment -
When the weight distribution of the turntable is uneven, excess vibration or noise occurs during rotation, which causes degradation in sound quality. To counteract this, the balance of the turntable is adjusted at the factory by using specialized high-precision balance adjustment equipment for each and every item after the turntable is assembled. Turntables that have undergone calibration are labeled with a sticker reading "BALANCED" to indicate that individual adjustment has been done.

High-Sensitivity Tonearm -
The tonearm employs lightweight magnesium which has a high damping effect, with cold drawing improving the characteristics of the material and achieving the high-precision required. In addition, high initial-motion sensitivity is attained by employing the traditional Technics gimbal suspension construction with the horizontal rotation axis and the vertical rotation axis intersecting at a single central point, as well as high-precision bearings using a cut-processed housing.

High-Quality Terminals -
The use of brass-milled and gold-plated phono terminals and ground terminals prevents degradation in sound quality while enabling the easy attaching and detaching of cables. Also, the use of metal shielding construction inside the case reduces the effects of external noise.

Analog Planet: " In the blink of a vinyl resurgence Technics went from retiring in 2010 the venerable SL-1200 turntable to resurrecting it six years later with two all-new “Grand Class” 1200s aimed not at the DJ market as was the original 1200, but at audiophiles.

The limited to 1200 units SL-1200GAE quickly sold out. In 2017 we reviewed the SL-1200G, which other than having a different magnesium tonearm finish and minus a plaque was identical to the limited edition SL-1200GAE.

To celebrate the company’s 55th anniversary, Technics just introduced a new, limited to 1000 units worldwide, SL-1210GAE, with an American list price of $3999.99 not including a cartridge.

The differences between the new turntable and the original SL-1200GAE are for the most part cosmetic. The SL-1210GAE’s top plate is a dramatic-looking anodized black brushed hairline finish. The operating buttons and the magnesium tonearm are also black-finished. Affixed to the top plate is a numbered 55th-anniversary plaque.

The one new operating feature is the ability to extinguish the in some situations distracting strobe light. Some listeners claim that the strobe light’s operation produces noise so being able to extinguish it should make it possible to test that claim (I didn’t), Otherwise, the new turntable’s statistics and features appear identical to the original’s and equally impressive but rather than repeat them here, click on the above hyperlink and read the 1200G review. Here are the new ‘table’s Platterspeed measurements, which theoretically should have been nearly identical to the 1200G’s extremely good ones and were:" 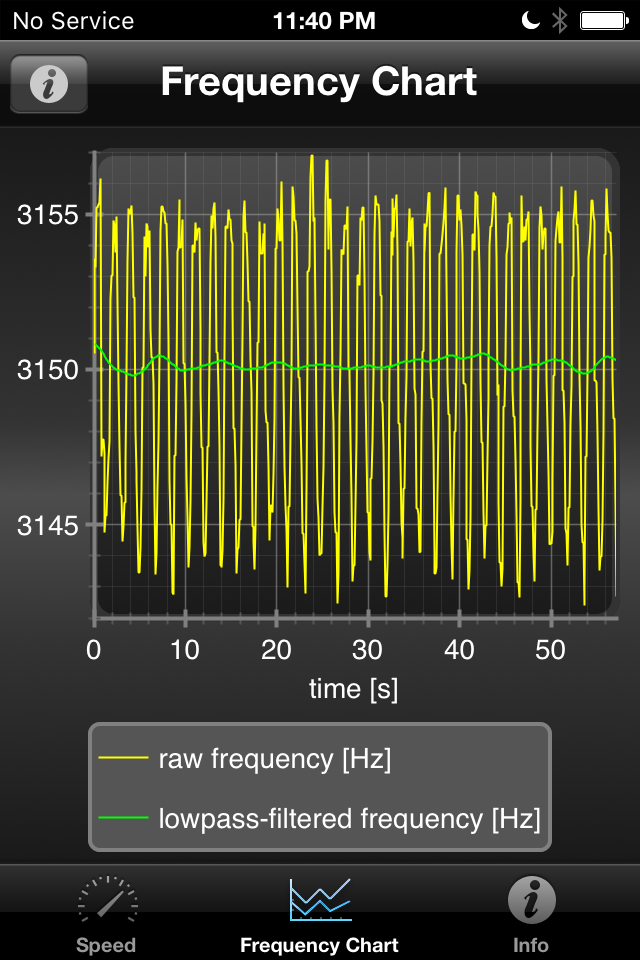 "Technics has changed its spec sheet to reflect that the “effective length” is the pivot to spindle distance (here, 215mm) plus the overhang (15mm), which is how most arm designers describe it. Previously Technics listed the pivot to spindle distance as the “effective length” and that produced confusion for some (like me!). That’s a worthwhile change.

Technics does not provide the arm’s effective mass but describes it as “lightweight” and gives the headshell mass as “approximately 7.6grams”. Generally speaking, a “low mass” arm would weigh 10 grams or less, a “medium mass” arm, 11-25 grams and an arm above 20 or 25 grams as a “high mass” arm.

So, if the Technics arm’s effective mass is, say, 8 grams plus 7.6 for the headshell that’s close to 15 grams, making the arm “medium mass”.

"This brings the total cost to approximately $5573. I’m not here to tell you that’s “cheap”, but since you are reading this you know how high the price of a front end rig can go.

The Grado weighs 8 grams and compliance is 20µm/mN, so add 8 grams to the approximately 15 gram effective mass arm and the total is 23 grams. Based on the graph I have of effective mass versus compliance, that would put the arm/cartridge’s resonant frequency at around 7 or 8Hz—on the low end of acceptability or actually just outside the ideal 8-12Hz range. When I measured using the Hi-Fi News & Record Review Test Record (HFN001) I found the horizontal resonant frequency at 11Hz and the vertical at 9, both of which are acceptable. That means either the arm’s mass is lower than my estimate or the cartridge’s compliance is lower, or both. I’d bet on the arm’s mass being somewhat lower. In any case, the Grado Labs cartridge worked well and sounded really sweet and well-detailed. Have a listen to a minute of Ferit Odman’s all-analog Dameronia With Strings, which I hope is still in print! (EMLP0002)."

"The SL-1210GAE is a limited edition with most going to Europe so if you want one, grab it while it’s available. When I think of what else is available at the price point, there is some good competition, but none built to this quality level. Built well, sounds and measures well and looks smart. Pair with an appropriate cartridge and you’re good to go." - Michael Fremer