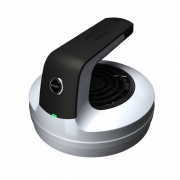 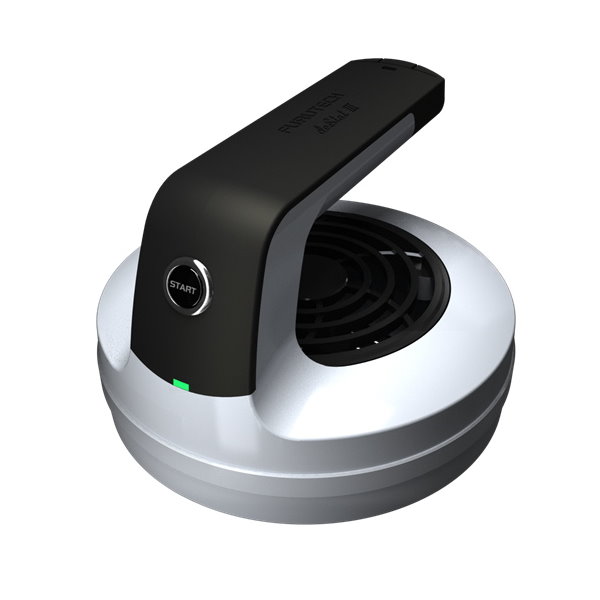 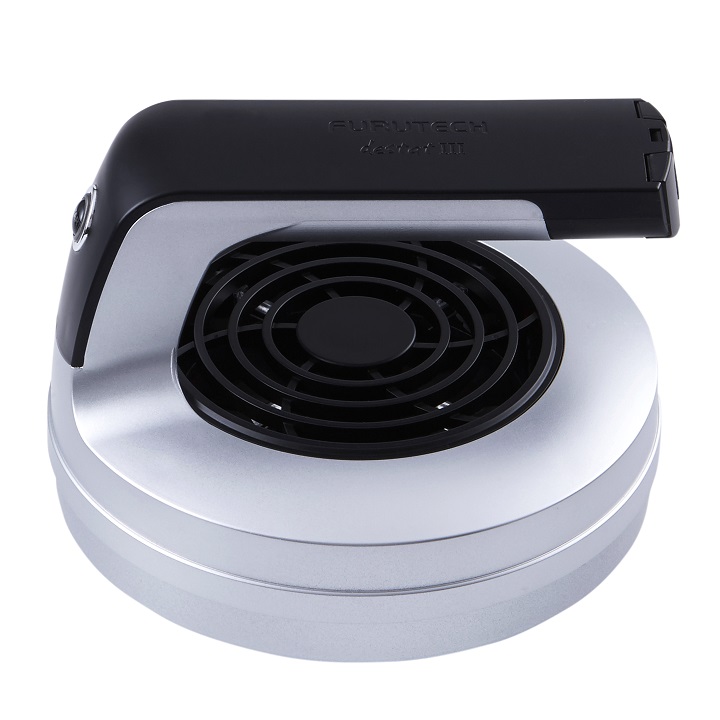 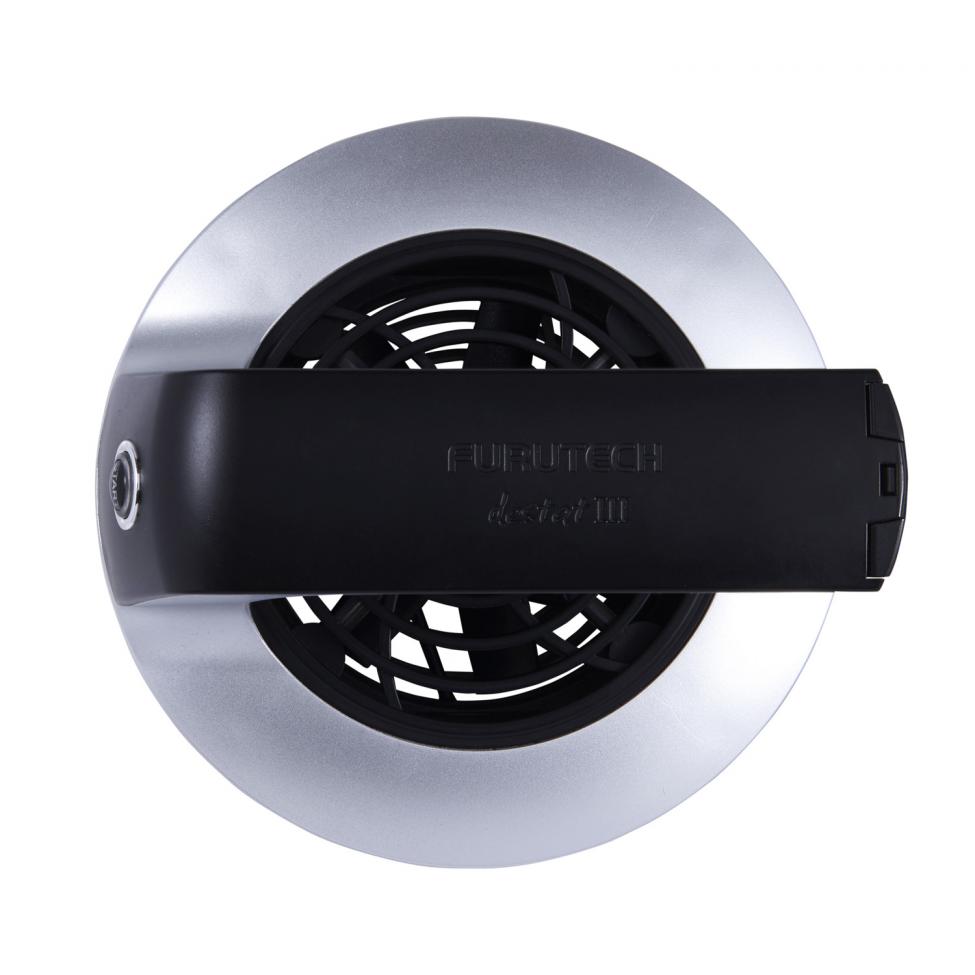 MY TAKE: Easily the most effective device I have used for removing static from LPs. - Galen Carol

The DeStat III from Furutech is an interesting tool devised to eliminate static from LPs. The thing really does work and has been proven effective by readings taken with a gauss meter before and after treatment.

Removing static with the DeStat III is a simple 15 second procedure. Simply hold the device over the media, press the button and you're done.

The unit is equally effective and removing static from all media including LP, CD, DVD BluRay, etc. Furutech also touts the unit’s effectiveness at removing static charges from equipment, power cords, interconnects, speaker cables and the like .DeStat's sonic impact has been verified countless listeners.

Stereophile: "It gave me a better view into each recording, and I can’t imagine living without it now that I’ve heard the improvement it can bring. Anyone can enjoy the deStat..." It’s something (static) that, until it’s gone, you’ll never know you’re listening to. You’re so used to hearing it that you listen around it. But once its absence is heard it’s hard to go back. I now consider the deStat a mandatory accessory for any self-respecting audiophile who wants to extract the best from his music. It brought improvements to both digital and analog media in equal proportions. I plan to keep it around my house so I never have to wonder what I might be missing with any kind of disc." - Stereophile

6 Moons: "The Furutech deStat turned out to be a piece of tremendous value and it'll take permanent residence next to my turntable - which isn't all that far from the CD player and it may even make the occasional excursion out to the DVD player in the next room. We'll see. If you're not happy with the performance of your system, the deStat won't change that. Its effects are not that pronounced or dramatic. But a careful listener will easily be able to appreciate just what the deStat does and it will take your vinyl listening pleasure to the next level. I can also well imagine that those living in drier climates may feel as strongly about the deStat when used on CDs and other silver discs as I did on vinyl. But even in my room I feel that the deStat has an important place as one of the smaller pieces needed to complete the digital puzzle. Good for digital, great for vinyl? That makes for a pretty solid universal recommendation. Go check one out and see if I'm right." - John Potis, 6 Moons

Soundstage!: Furutech destat III static-charge eliminator - "It gets cold up here in Canada. Although Toronto is only just north of Buffalo, we regularly get -20°C (-4°F) days, and even colder nights. My house is about 35 years old and needs new windows and doors -- it’s fairly leaky. That means that our forced-air furnace runs long and hard on those cold days, and the built-in humidifier can’t keep up -- the humidity often hovers around 20%. That’s dry. We run standalone humidifiers in the bedrooms overnight, as otherwise we’d wake up with cotton mouth and nasty dried boogers. Not healthy.

"Nor is bone-dry air good for LPs. While excess humidity can play hob with album covers -- mold is nasty -- dry air encourages the buildup of static electricity, and every time you remove a record from its inner sleeve builds up that charge. As the two disparate materials -- the LP’s vinyl, and whatever the inner sleeve is made of -- are separated, ions flip from atom to atom, and even more static charge accumulates. While I can’t prove it, I feel that the process of playing the record -- the rubbing of plastic groove against diamond stylus -- further increases static buildup. Add it all up, and when I remove an LP from the turntable at the end of play, I often hear a nasty crackle -- and, more often than not, the record mat comes away from platter, stuck to the record. This happens frequently with the felt mat provided with my VPI Prime Signature turntable, and about a third of the time with the rubber mat that comes with the Dr. Feickert Analogue Volare ’table (review forthcoming).

"This mat-lifting business is inconvenient and annoying. I hate it, but I’ve had no way to keep it from happening. And consider the fact that the electrical signal generated by a moving-coil phono cartridge is insanely low -- Top Wing’s Blue Dragon, which I reviewed a year or so ago, outputs a feeble 0.2mV. It doesn’t take much to believe that a big whack of static could interfere with such a pathetic little signal.

"Beyond the concept of absolute fidelity -- the altar at which most audiophiles worship -- static is an annoyance, and one I’ve suffered in silence. No longer! So over the past year I’ve been using Furutech’s destat III static-charge eliminator, with great success.

"In all, I couldn’t be more pleased with the Furutech destat III." - Jason Thorpe

"Galen, This is indeed an incredible tool. Every LP I played after the treatment made a huge improvement. Using DeStat on a LP his like adding a master clock to CD player. It really is a mandatory product."

"Thank you Galen: the deStat arrived today and it's amazing. Worth its price and indispensable for audio"