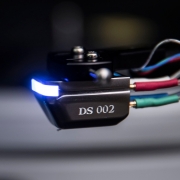 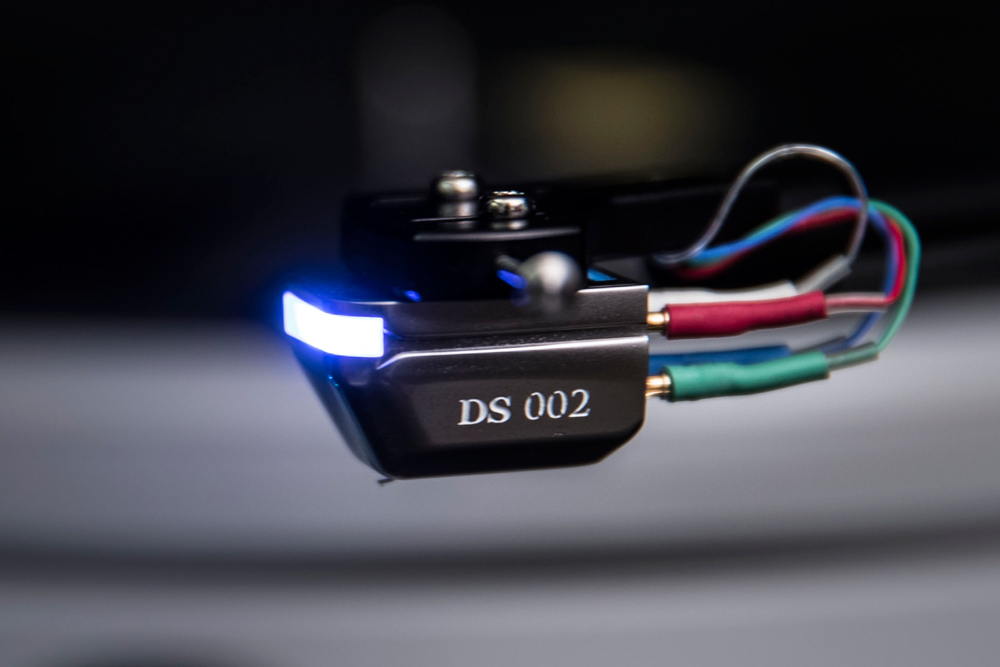 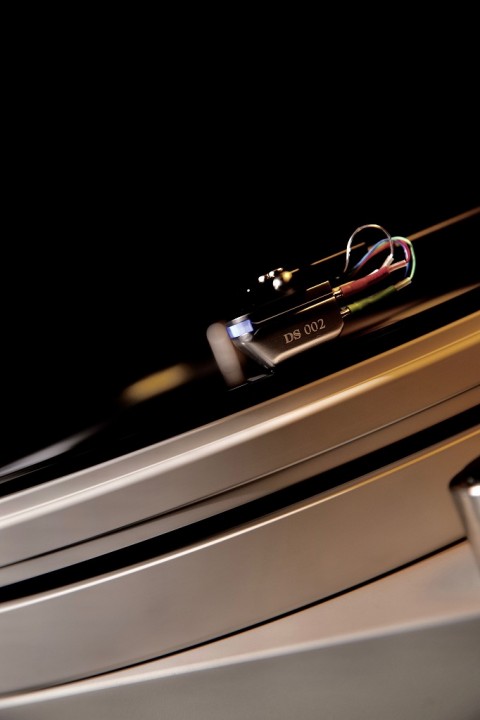 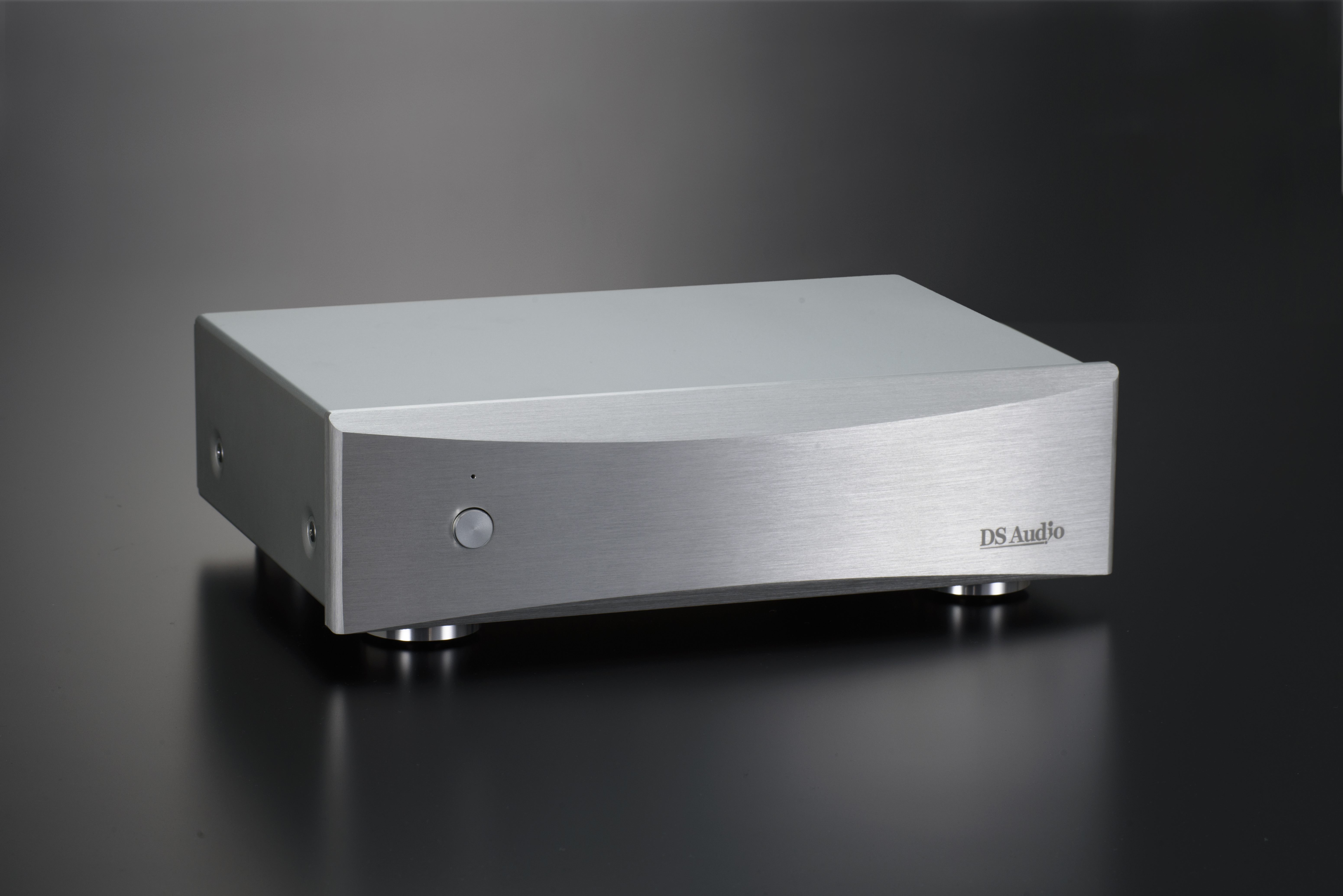 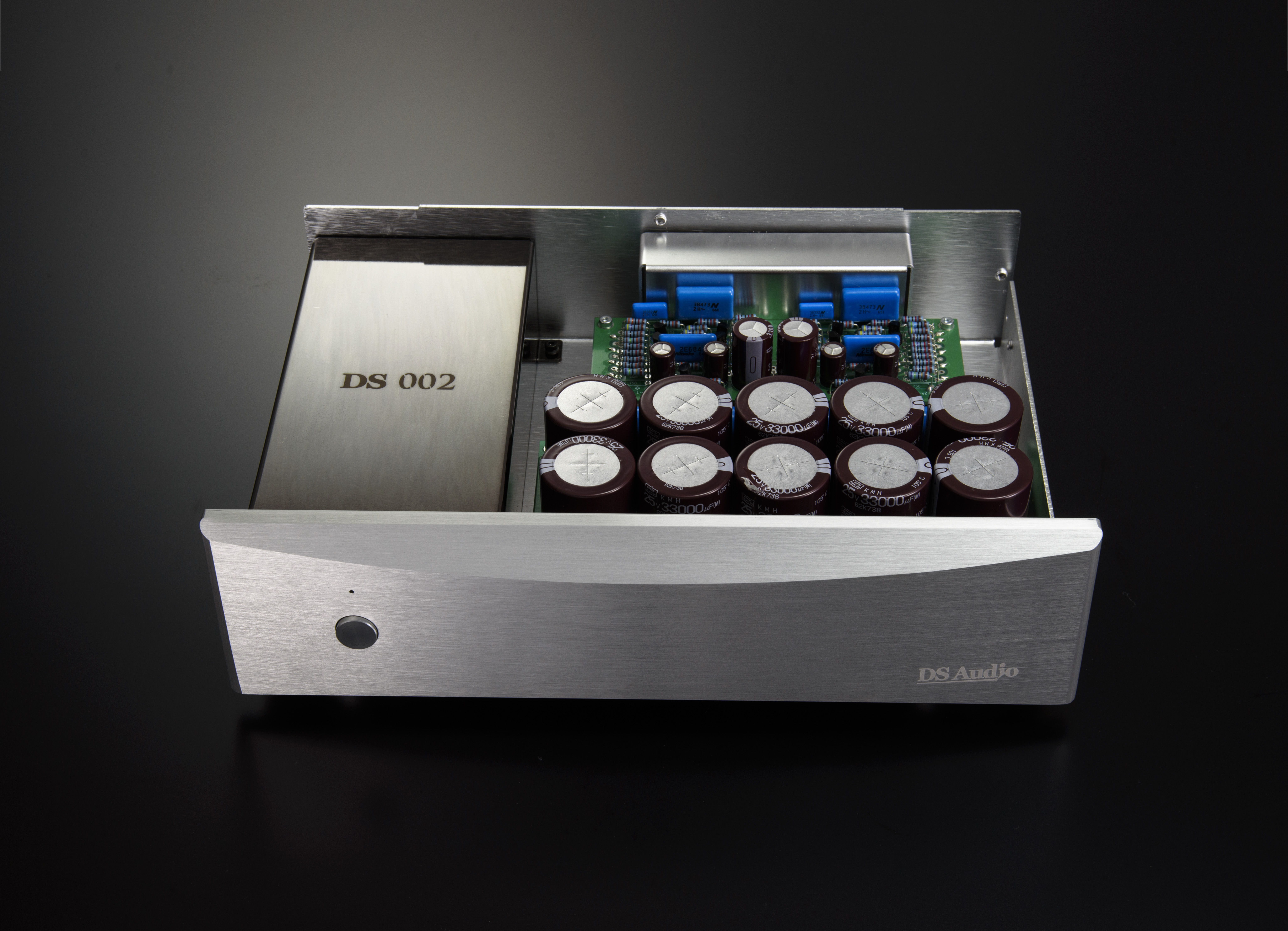 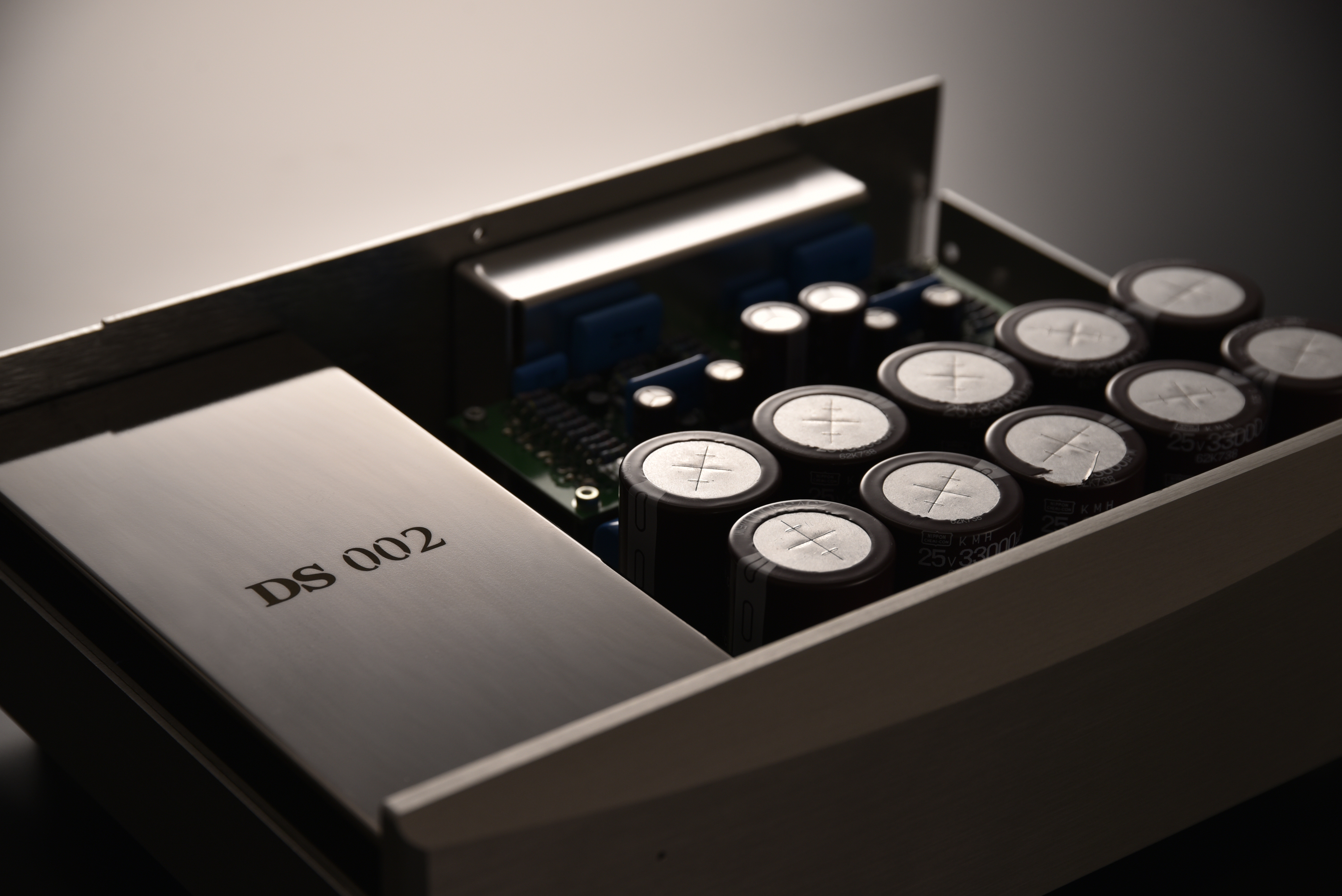 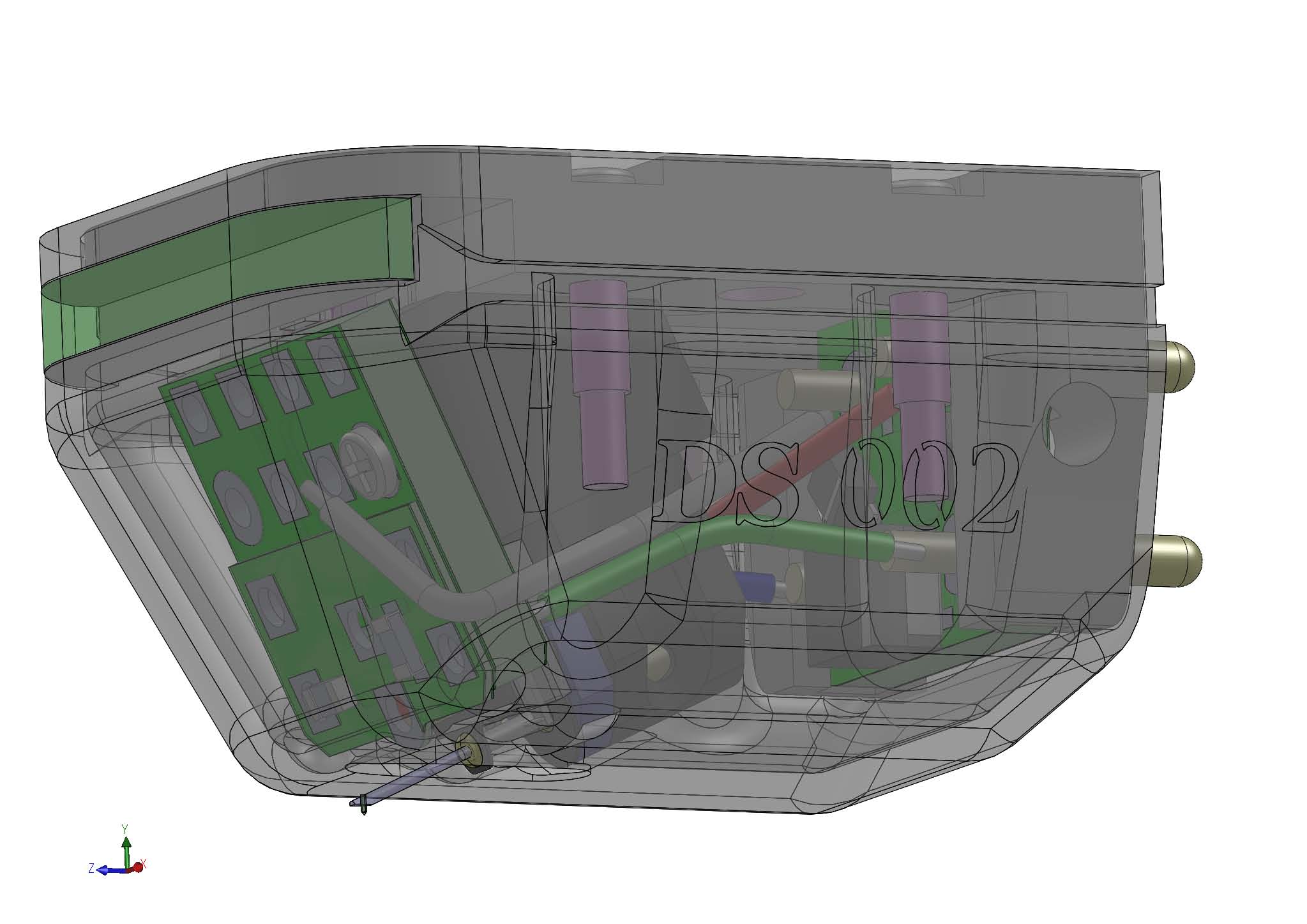 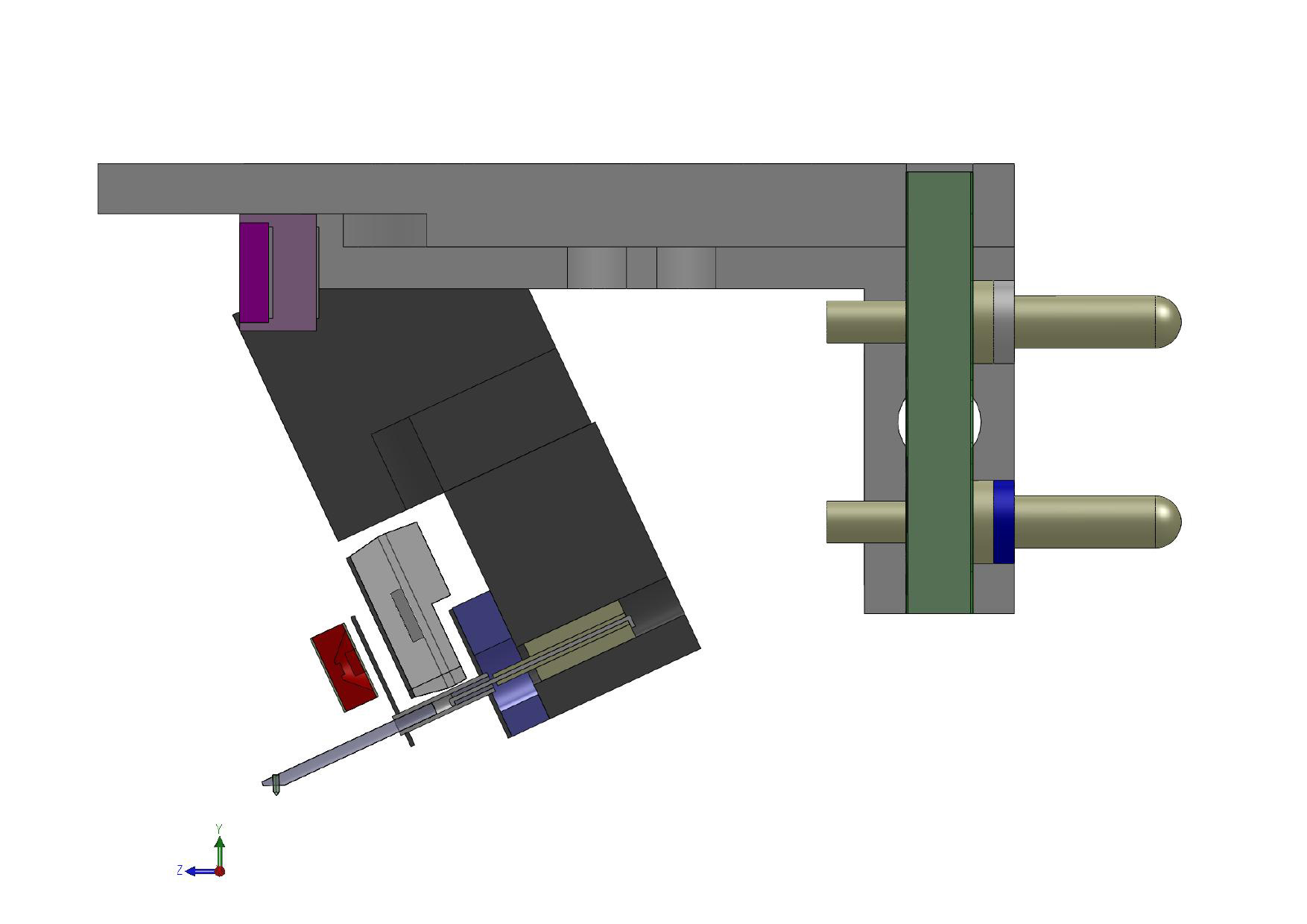 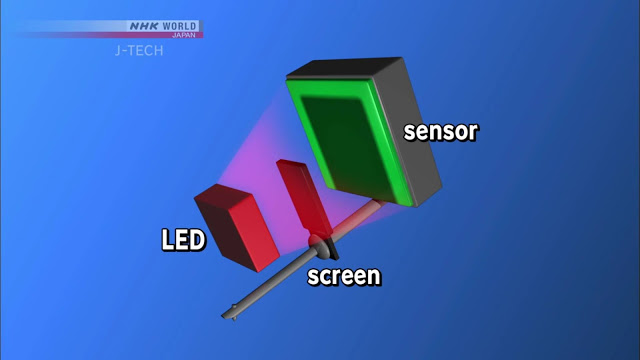 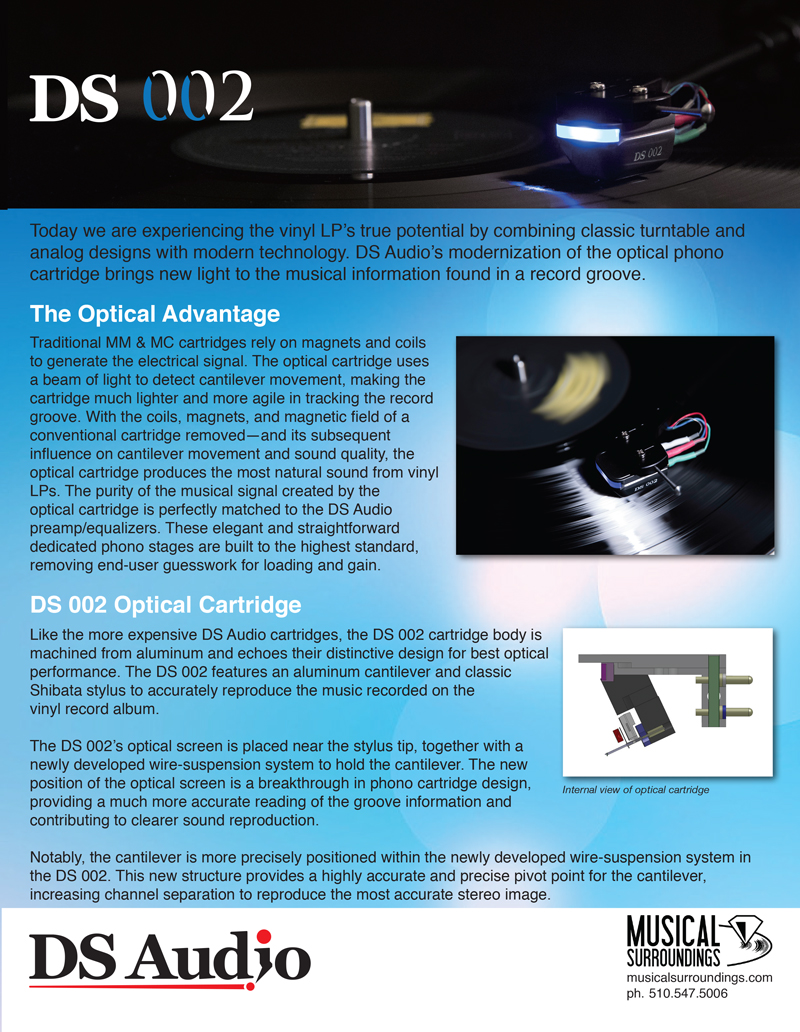 Unlike conventional phono cartridges which employ an electromagnetic generator (a coil positioned within a magnetic field in the case of a moving coil design), Japan’s Digital Stream Corp. uses their vast background in optical systems to re-imagine the phono cartridge using state of the art optical technology. In the DS 002 an infrared LED and optical sensor interpolate the subtle movements of the stylus/cantilever – a unique design that eliminates a number of drawbacks found in a conventional electromagnet design.

Forty Years in the Making –

DS Audio is a newly formed audio business group within Digital Stream Corporation, a company involved in the precision laser optical industry for over 25 years. The company’s high-precision disc inspection systems are used worldwide and their 95% market share in this area is testament to their quality.

Besides working in the precision measurements by Laser optics, DSC has explored unique applications of laser technology such as PC input devices, gaming devices. The optical mouse, for example, was co-developed by Microsoft and Digital Stream Corporation. It has changed the world. DSC has received the Outstanding Engineering Excellence designation from Microsoft and was recognized for their work by Japan’s Ministry of Economy, Trade and Industry.

The DS 002 System consists of the DS 002 Optical Cartridge and the companion Preamp/Equalizer.

Featuring an aluminum cantilever and classic Shibata stylus, the DS 002’s optical screen is positioned closer to the stylus–a breakthrough in phono cartridge design allowing for more accurate reading of the information within the record groove.

Like the more expensive DS Audio cartridges, the DS 002 cartridge body is machined from aluminum and echoes their distinctive design for best optical performance. The DS 002 features an aluminum cantilever and classic Shibata stylus to accurately reproduce the music recorded on the vinyl record album. The DS 002’s optical screen is placed near the stylus tip, together with a newly developed wire-suspension system to hold the cantilever. The new position of the optical screen is a breakthrough in phono cartridge design, providing a much more accurate reading of the groove information and contributing to clearer sound reproduction.

Notably, the cantilever is more precisely positioned within the newly developed wire-suspension system in the DS 002. This new structure provides a highly accurate and precise pivot point for the cantilever, increasing channel separation to reproduce the most accurate stereo image.

Mono&Stereo: "In contrast to moving-magnet (MM) and moving-coil (MC) cartridges that work on the principle of electromagnetic induction, an optical cartridge uses a beam of light to read stylus/cantilever movement. The advantage of this system is twofold: it makes the cartridge much lighter and more agile, while also completely eliminating the frictional force caused by magnets and coils and the resulting influence on stylus/cantilever movement.

"A further key advantage lies in the cartridge’s output. In conventional MM and MC designs, the output signal depends on the velocity at which a tiny magnet or coil moves in an electromagnetic field. At lower frequencies the magnet or coil moves slowly so the output signal is small, while at higher frequencies it moves more quickly and so the output signal is disproportionately large – hence the need for equalization. In contrast, in an optical cartridge the output signal depends on the distance that the styles moves, so there are no disparities between high and low frequencies. Therefore no equalization is required (other than RIAA curve correction) and low frequency reproduction is much enhanced, since an optical cartridge can theoretically detect signals as low as 1Hz.

"The resulting sound has delicacy, subtlety, natural warmth and a deep richness. Most important, it is stunningly real, capturing all of the miniscule yet critical details that make a musical performance come to life." - 2017

The Absolute Sound: “[The DS 002] simply has to be heard to be believed.” - Jonathan Valin

The Absolute Sound: Rated among the top 5 most significant analog introductions at CES 2017 by Julie Mullins

The Audio Beat: "DS Audio showed a new and lower-priced optical cartridge and phono stage, the DS 002 (top two products, $5000 for the cartridge and preamplifier/equalizer). The DS 002 promises to bring the advantages of optical cartridge design within the reach of a greater number of audiophiles. An optical cartridge uses a beam of light to detect cantilever movement, rather than relying on an electrical signal generated by magnets and coils. This is claimed to produce a signal of greater purity. Based on the success of the much more expensive DS Master 1 that  has so impressed audio writers, Aki Aoyagi developed a less expensive design. However, the DS 002 is no budget product -- it is built to a very high standard." - CES 2017

The Absolute Sound - "I first wrote about the revelatory experience of listening to a DS 002 in my report on CES, where I heard the voices of Levon Helm and Richard Manuel on the refrains of “King Harvest” from The Band [Analogue Productions] reproduced with such clarity and distinctiveness it was as if each were separately miked, rather than leaning into the same mike. Since then I’ve had scores of these “Aha!” moments with the DS 002, which sorts out simple mixes like Peter, Paul, and Mary’s “All My Trials” (trust me—you’ve seldom before heard them sound so completely like a trio—or heard so clearly the way each voice is being dialed up or dialed back by the recording engineer) to complex ones like “Chan Chan” on Buena Vista Social Club at Carnegie Hall equally well, revealing new felicities with such regularity that it makes listening a non-stop discovery process. Moreover, the DS 002’s stunning directness and clarity are not being purchased at the cost of lifelike tone color; on the contrary, the DS 002 is beguilingly warm and rich in the bass and midrange (I will have a caveat about this in a few paragraphs), and quite solid and three-dimensional in imaging.

"Usually when you hear a leap forward in realism—and the DS 002 certainly qualifies as a leap forward, especially for the dough—it’s because you’re hearing more of the musicians and the music (e.g., the Obsidian/Viper’s magic way with Eliades Ochoa’s voice, for which see p. 100). But while the DS 002 most certainly reveals “more,” the more that it consistently reveals is less a matter of select details (although it is certainly revealing them, too) than of a clearer and more complete presentation of the overall picture. After all, making a roughly blended harmony into two distinct voices—as on “King Harvest”—is too profound a change to be called a mere detail. No, there is something fundamentally different about the DS 002’s sound, just as there was about the Decca London’s at its best, that alters the entire sonic gestalt." - Jonathan Valin

The Audio Beatnik: "The DS Audio line of optical cartridges is all about pure fidelity and great harmonics played with rich and beautiful tonal color. They offer natural and realistic warmth without giving up speed or detail, and they have a temporal realism that is closer to live music than I have heard from any magnetic cartridge...Well, now I have heard it, and the DS 002 is wonderful. It ranks just behind Master1...For now, the DS Audio DS 002 is the best cartridge I have heard for under $10,000. In fact, with it’s included phono stage for $5,500." - Audio Beatnik

Direct Stream Corporate Video (information on the cartridge is at 17:00 minutes into the video)