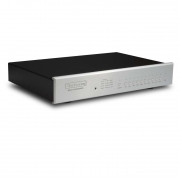 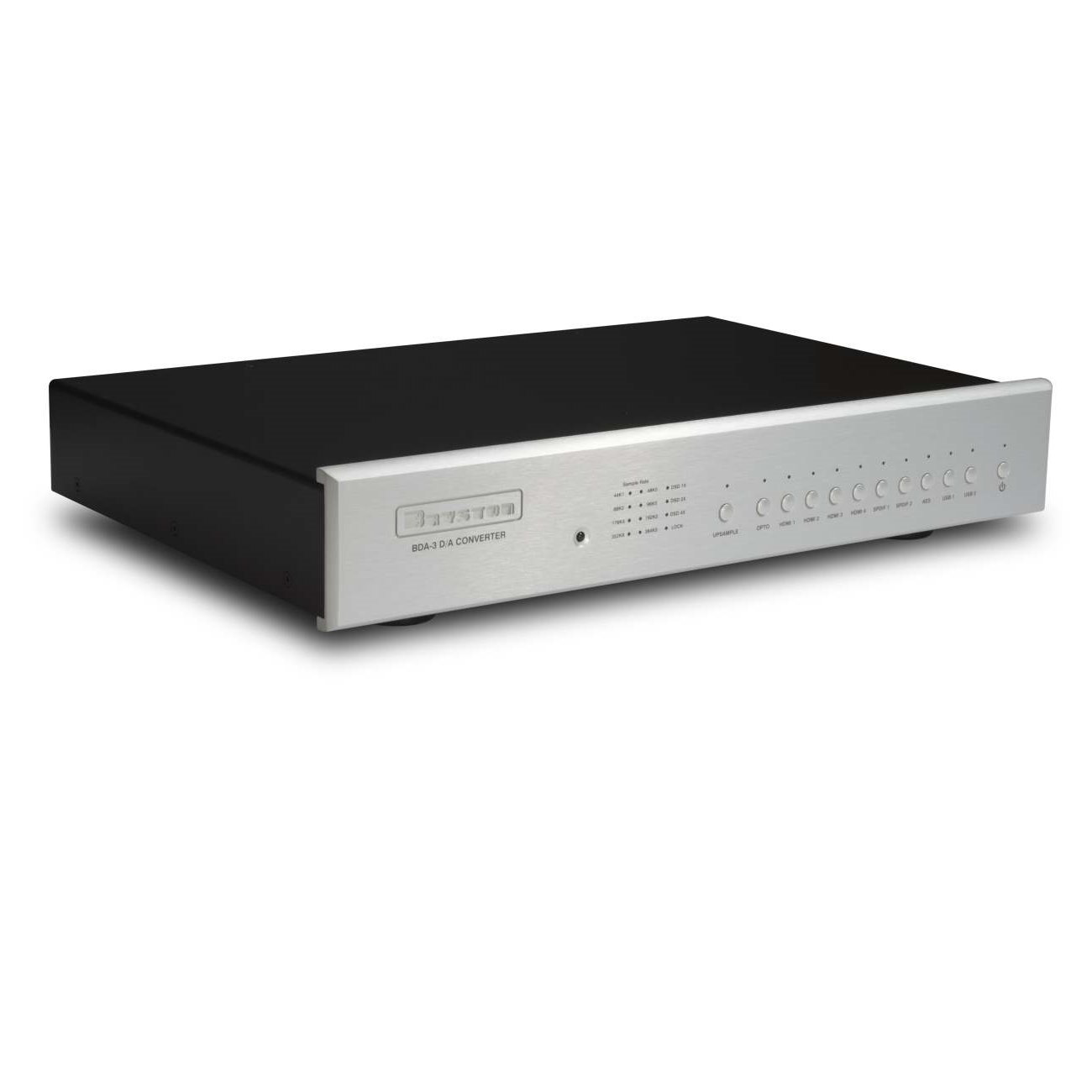 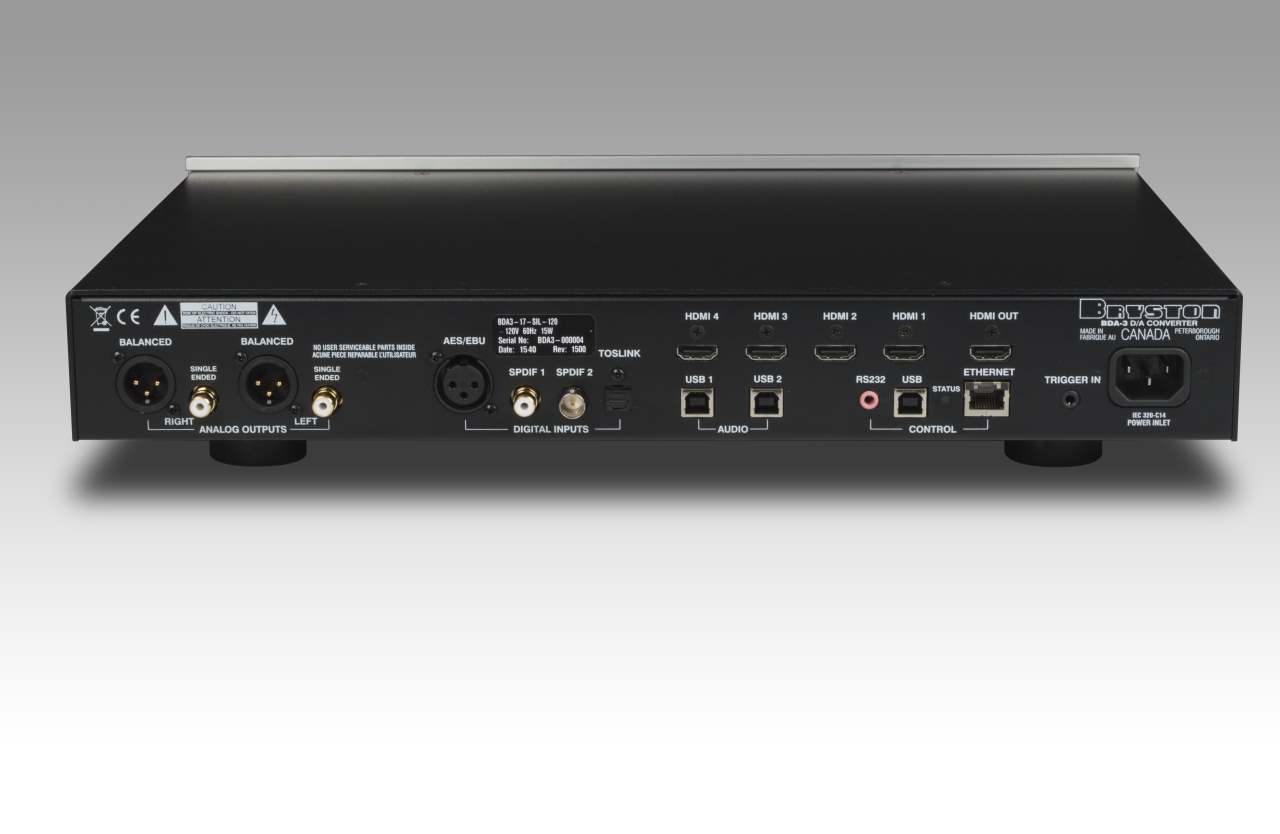 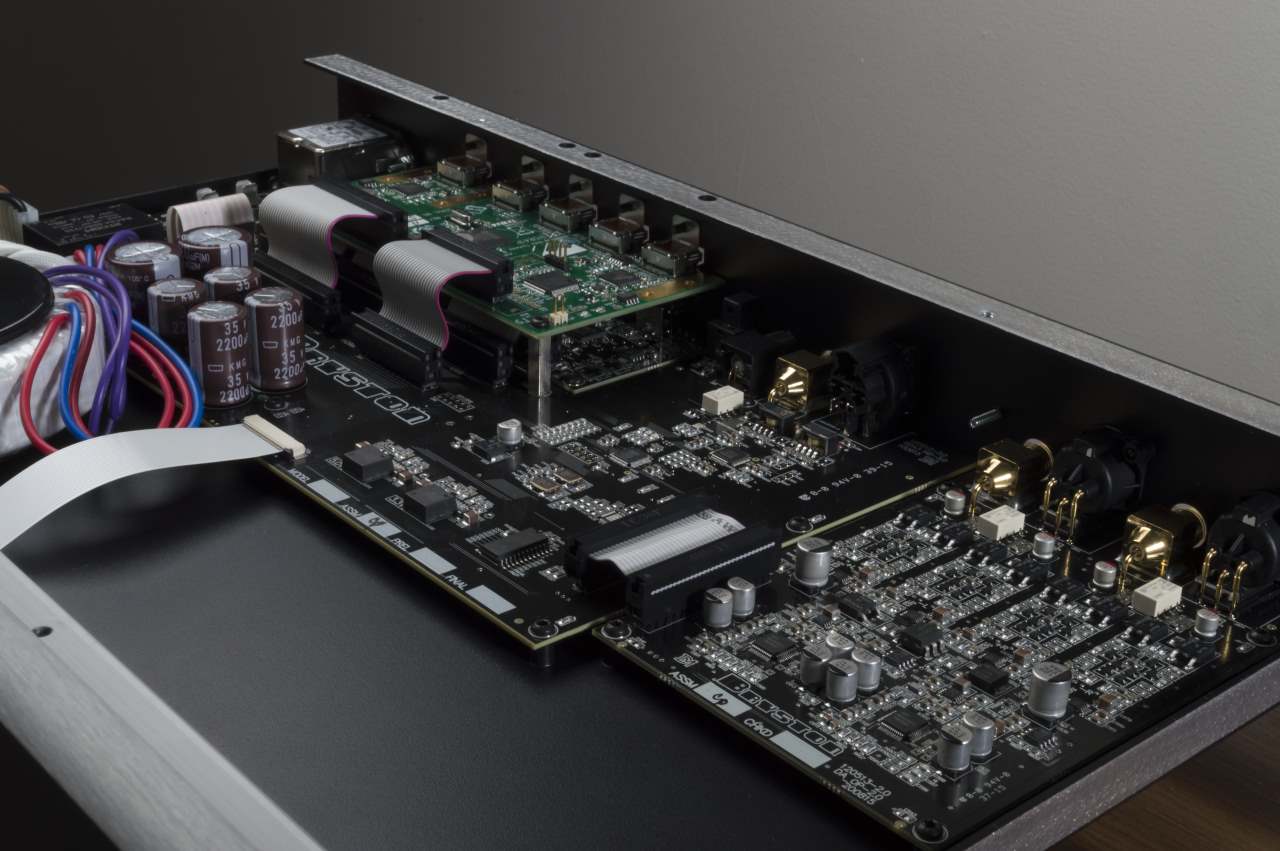 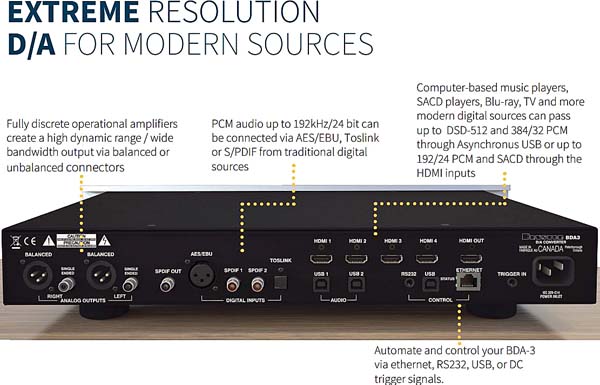 MY TAKE: Bryston offers outstanding digital products. Their top-of-the-range BDA-3 represents a superb sounding product, backed by the reliability and customer support that customers have enjoyed for over 50 years. - Galen Carol

The Bryston BDA-3 is a world class DAC (digital to analog converter) that is packed with the perfect mix of features making it an essential part of your digital audio chain. Use diverse audio sources such as Bryston's BDP digital music players, computers, music servers, and CD players to get the most accurate and superb sounding digital playback currently available. The BDA-3 is a magnificent DAC best suited for systems where high performance is desired.

The BDA-3 delivers superb sonic performance through re-sampling and re-clocking of the digital input signal. With the exception of user-selectable up-sampling, the BDA-3 doesn't convert anything to another format or re-sample at a non-native rate. The most notable difference between the BDA-2 and BDA-3, in addition to PCM playback capable of 384kHz/32 bit resolution, is that the BDA-3 is fully DSD enabled. The BDA-3 can decode up to DSD-256, through asynchronous USB inputs, and accepts SACD input via HDMI. The BDA-3 incorporates 10 separate inputs which include four 2-channel HDMI, asynchronous USB, AES/EBU, TOSLINK, and digital coax. Additionally, the network module which facilitates control via TCP/IP and RS-232 makes the BDA-3 a must for modern home automation.

The Absolute Sound: "I began assessment of the BDA-3 by comparing it against the BDA-2, which has served as my reference ever since my review in Issue 233. With either the Bryston BDP-1 or BDP-2 file player as the digital source, the BDA-3 immediately drew my attention to the vibrating resonance of the bodies of acoustic string instruments, each note blooming richly and decaying naturally into the surrounding air. Everything played through the BDA-3 came across with a lithe ease, even-tempered and well balanced. Harmonics extended into the upper octaves with a relaxed open airiness, refreshingly free of shrillness.

"This exceptional verisimilitude allows the distinctive character of specific instruments to be discerned with considerably less mental effort than is often the case, nowhere more aptly demonstrated than by the measured, slowly awakening “Dawn” dialogue between Simon Shaheen’s oud and V.M. Bhatt’s mohan vina (Saltanah, Water Lily Acoustics 24/88.2 download). I’ve heard this performance hundreds of times, through all manner of equipment, but the BDA-3 enabled me to follow the intentionality of the two masters’ playing as never before—making their performances engrossing from shadowed beginning to radiant ending.

"As I continued comparing the BDA-3 and BDA-2 with familiar recordings, it became clear that the newer design rendered instrumental timbres with more substantive physical presence. Every instrument simply exhibited fuller, weightier solidity, independent of the frequency range covered. I suspect that this fundamental shift in tonal perspective may be due to a change in the type of digital filter that Bryston has chosen for the BDA-3 relative to the company’s prior digital offerings. This advancement manifested itself spatially, as well, with instruments and singers more fleshed-out both tonally and dimensionally.

"One of the most enlightening aspects of following the writings of this journal’s founder Harry Pearson was the evolving sense of discovery, and of the sometimes difficult task of trying to find the right words to describe what we hear. I readily empathize, as I find myself struggling to convey my most salient impression of the Bryston BDA-3. It did not take long to ascertain that listening through the BDA-3 was simply more evocative of the experience of hearing the real thing, significantly less impaired by the host of digital artifacts that often remind us that we are listening to a reproduction, rather than to live music.

"As I have come to expect from Bryston DACs, the BDA-3 was reliably consistent regardless of the digital input format. Differences between sources and cables were readily apparent, whether via SPDIF, AES/EBU, USB, or HDMI; this enables the user to choose the best-sounding connectivity option from each source component, and remain confident that the BDA-3 will not constrain its performance.

"The evolutionary development of Bryston’s DACs from the original BDA-1 to the BDA-3 has been an object lesson in digital progress. Bryston’s BDA-3 DAC surpasses the high-value performance standard set by the BDA-2, enables inexpensive HDMI-equipped disc players to function as premium source components, and adds exceptionally engaging DSD playback to its potent mix of virtues. I’ve already purchased the review sample as my new reference." - Karl Schuster