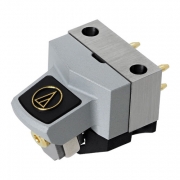 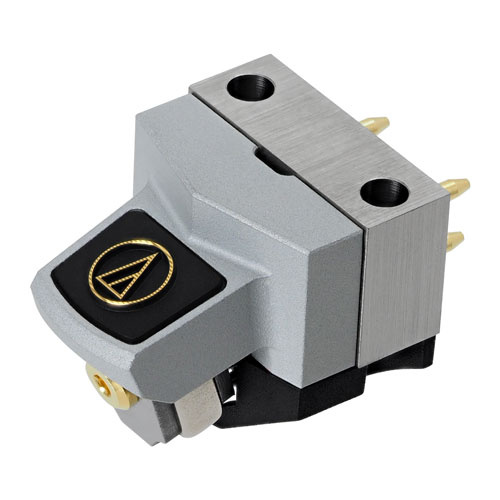 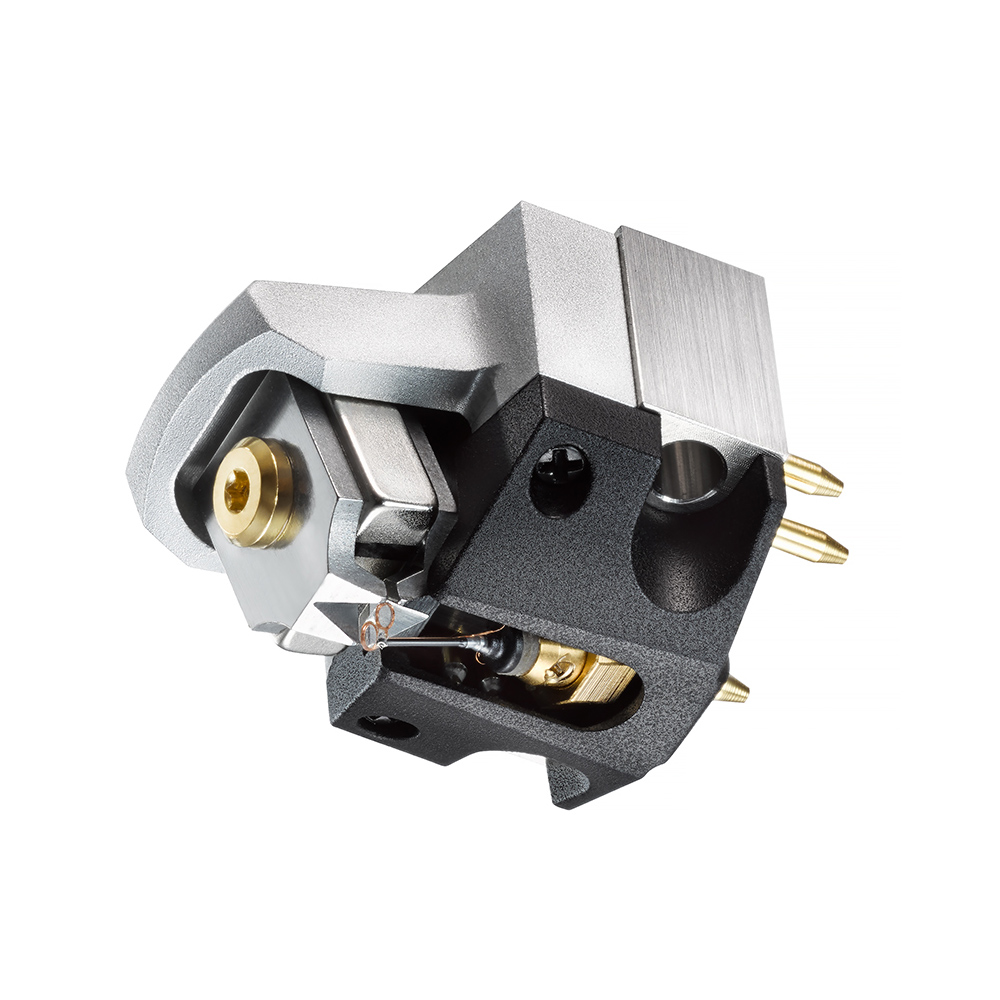 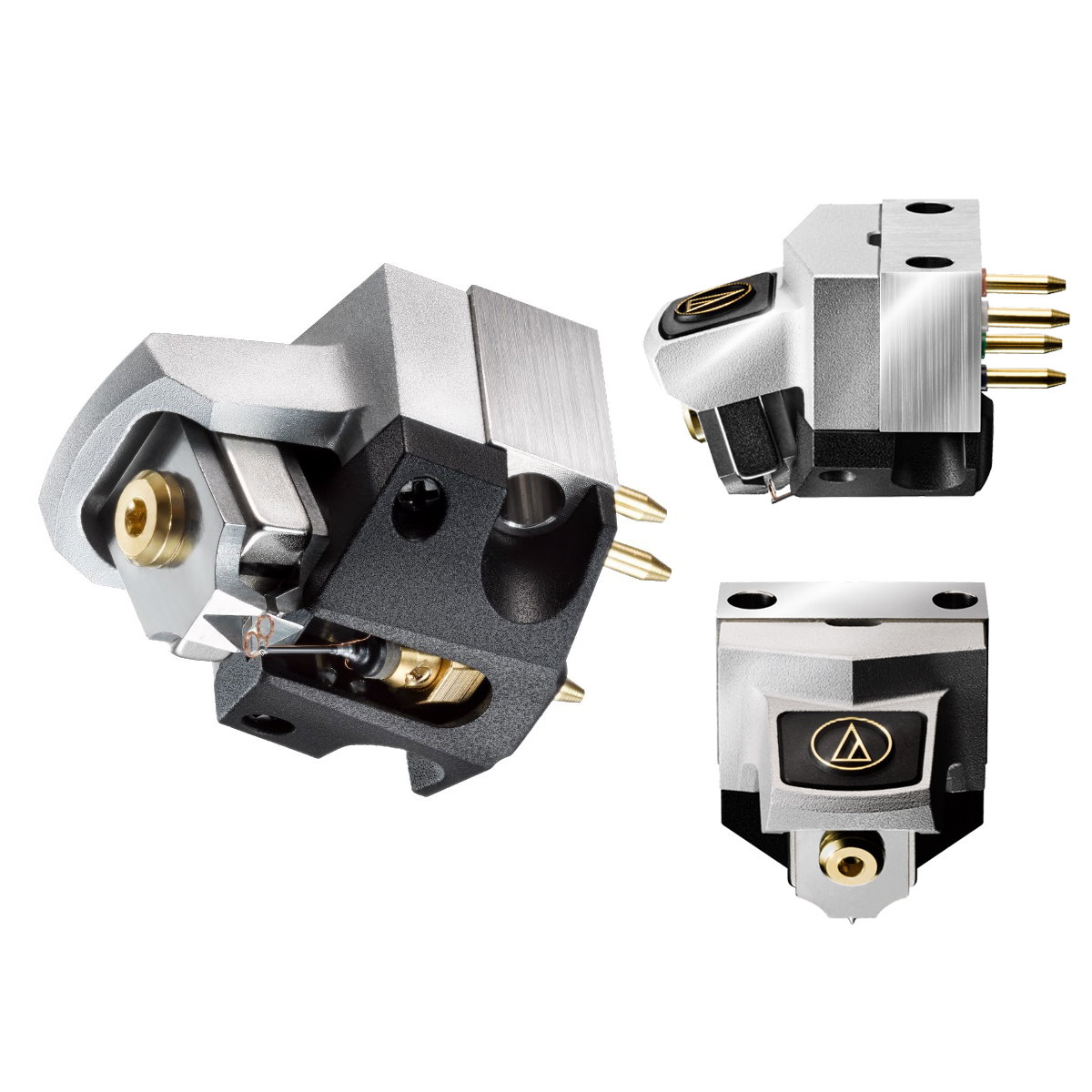 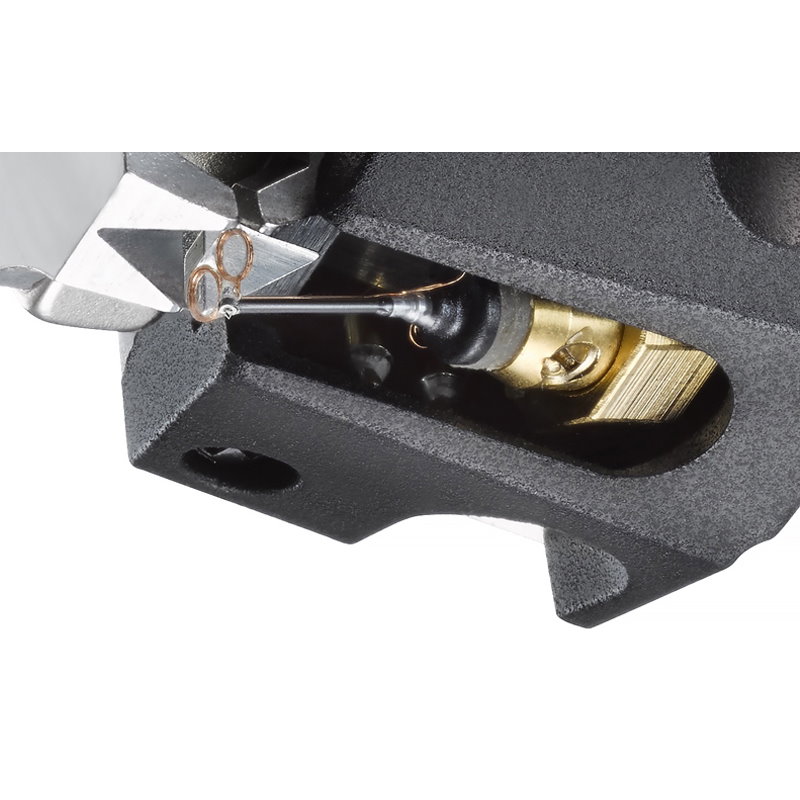 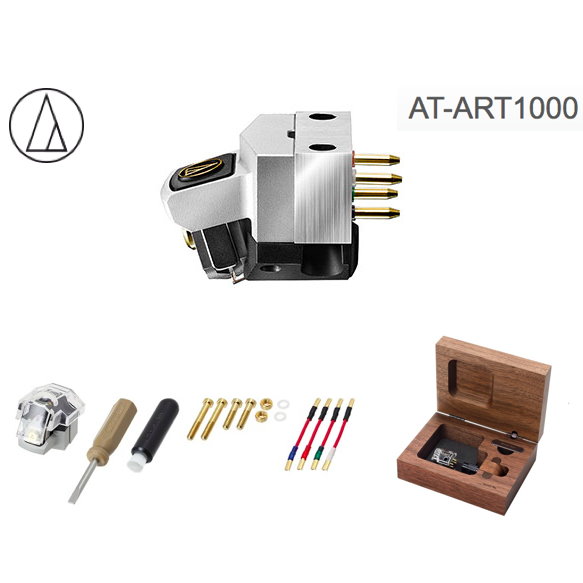 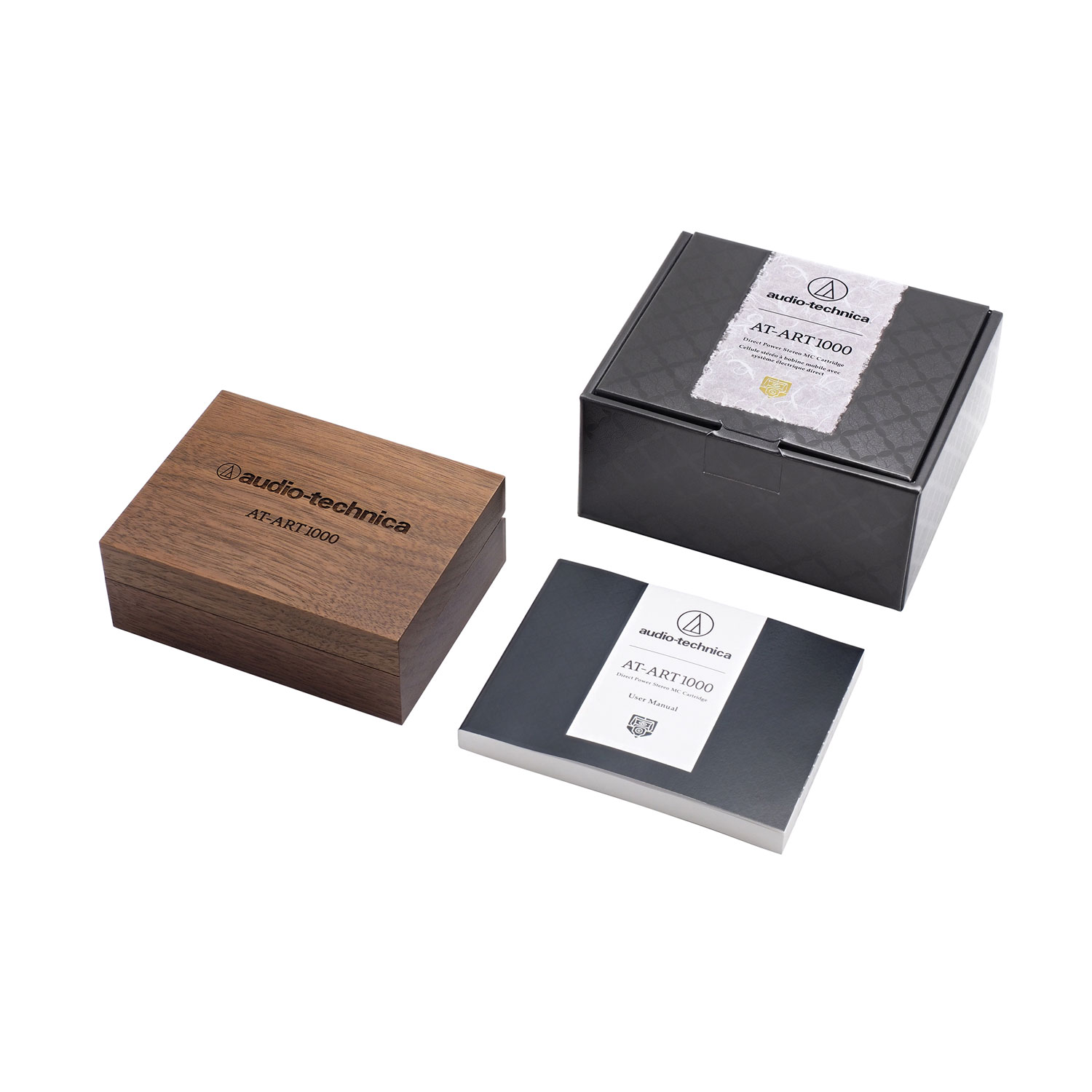 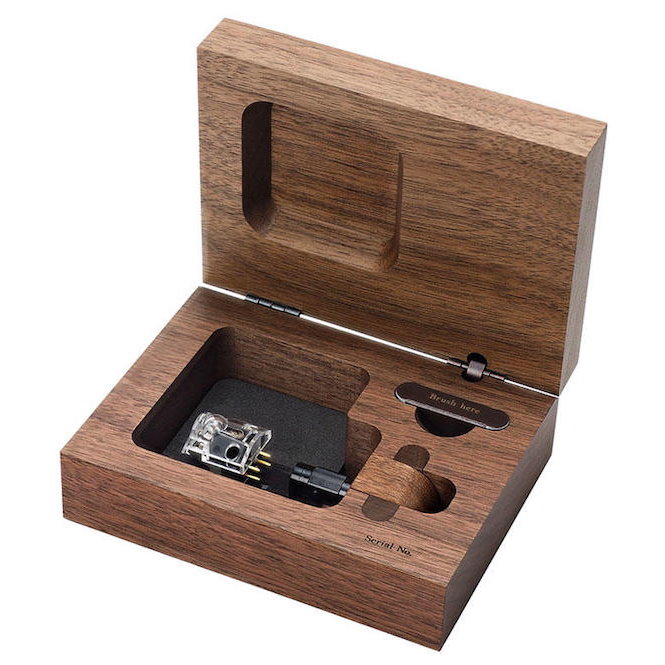 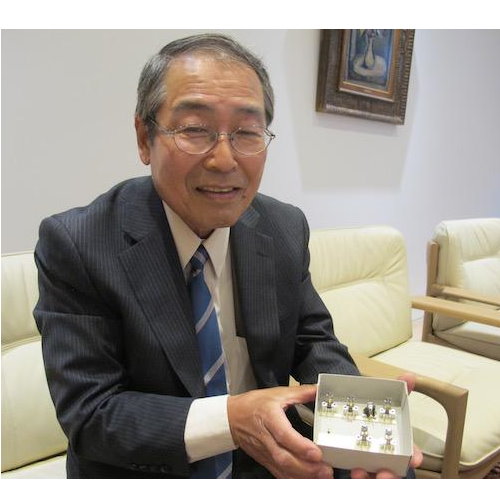 MY TAKE: Wow, is this cartridge ever fast! The speed, articulation and dynamics must be heard to be believed. Placing the coils at the end of the cantilever is both novel and apparently VERY effective! - Galen Carol

The AT-ART1000 (“ART” for Audio-Technica Reference Transducer) is Audio-Technica’s new flagship phono cartridge, handmade in Japan. Born of the pursuit of audio excellence that has driven A-T for more than 50 years, the AT-ART1000 introduces an innovative, audiophile design heretofore unseen in mass-produced cartridges. The cartridge’s direct power system places the dual moving coil directly on top of the stylus tip, insuring that the audio quality does not suffer the negative effects normally introduced by the cantilever's length and material type. Having the coils move in such close proximity to the stylus tip allows the cartridge to vividly render even the subtlest sonic details and provide unsurpassed transient response.

Each of the cartridge’s two coils is constructed of 20 µm diameter PCOCC (Pure Copper, Ohno Continuous Casting) wire, wound eight turns to a diameter of 0.9 mm to create a non-magnetic core coil. The 3-Ohm coils are placed in the tiny 0.6 mm gap of a powerful magnetic circuit, enabling each coil to generate an output voltage of 0.2 mV.

The AT-ART1000 features the same high-performance line contact stylus and solid boron cantilever found in the AT-OC9/III, enabling the cartridge to faithfully trace the record groove and reliably transfer the signal to the coils. The base that supports the specialized magnetic circuit and vibration system is made from titanium. This sturdy base is instrumental in providing consistent playback, and works in combination with the cartridge’s hard plastic cover and aluminum housing to disperse resonance that negatively affects the sound quality.

To ensure audio quality is uncompromised by the cantilever’s length and material, the moving coil is positioned directly above the stylus tip without the need to transmit along the length of the cantilever. This close proximity between the coil movement and stylus tip allows the AT-ART1000 to vividly reproduce the finest sonic details, incredibly accurate medium and low frequencies, and deliver unsurpassed transient response.

Meticulously handcrafted in Japan with over 54 years in cartridge manufacture and design heritage.

20μm diameter PCOCC coil wire, wound eight turns to a diameter of 0.9mm creates a non-magnetic core coil. Despite its non-magnetic core type, a 0.2mV output voltage is delivered by placing a 3 Ohm coil within the miniscule 0.6mm gap of a powerful magnetic circuit.

To protect your investment, Audio Technica offers a Cartridge Rebuild Program service. Worn or damaged cartridges are returned directly to the factory for replacement of the entire assembly including stylus tip, cantilever, coils, and rubber dampers.

The Ear: "High end cartridges often end up being super refined, polished and tonally charming at the expense of transparency and immediacy, which means that they have coloration that benefits some recordings more than others. The ART1000 is tonally neutral, truly wideband and uncannily transparent, it doesn’t do this by tweaking the response in the upper midrange to give a strong sense of detail as can often be the case, but by employing technological advantage. I suspect that the engineering in this cartridge is so inherently expensive that it will never be trickled down to more affordable strata, but one can live in hope. At this stage the ART1000 deserves to be alarming the makers of big money cartridges, it’s clearly one of the best in the business. I only hope that the lack of a boutique brand doesn’t stop people from finding out just how incredibly good it is." - Jason Kennedy

Stereophile Class A: "Audio-Technica describes their new flagship, the moving-coil AT-ART1000, as a Direct Power System design: its moving coils are attached to the front of its cantilever, directly above the stylus—not to the inside end of the cantilever, as in most MCs. Thus does the AT-ART1000 carry the torch first lit by the coveted Neumann DST 62 pickup of 1962—and thus does it ensure that every deflection of the playback stylus results in a proportional change in signal amplitude, theoretically resulting in the lowest possible degree of compression of all phono cartridges. Sure enough, MF observed from the low-output (0.2mV) AT-ART1000 "microdynamic expression [that] was absolutely phenomenal: small shifts of emphasis in the strumming and drumming were clearly delineated." Mikey also praised the AT as "one of the most tonally neutral cartridges I've heard," concluding that, "If you can afford it, you need it!" (Vol.39 No.10)"

Stereophile: "Best of all was the performance I heard when I used the Audio-Technica to play Jacques Loussier's Play Bach No.1 (Decca/Speakers Corner SSL 40.500). No other cartridge of my experience offers a better idea of the pitches and rhythms of Pierre Michelot's double-bass lines in the Prelude 1. The A-T's brilliantly drawn dynamic contrasts made all of the instruments in the trio sound dramatic and lifelike, and none more so than Christian Garros's drums, which enter so faintly that, with other cartridges, they at first sound like surface noise. But with the AT-ART1000, every sound Garros made was musical—and impactful, and vital." - Art Dudley
Full Review

Analog Planet: "The ART1000 is manufactured in a small corner of the Machida City factory where one well-trained woman is responsible for the nearly impossible task of assembling the special cartridge." - Michael Fremer
Full Review

Autralian HiFi: "One of the best sounds I heard at High End 2016 was in the Audio-Technica room: The new ART1000 moving-coil turns the tables (so to speak) by placing the coils directly above the stylus, which makes tracking force critical (see close-up image below). But in a Vertere turntable with FM Acoustics amplification and PMC speakers the sense of immediacy was spectacular, as one might hope from an A$7,999 cartridge." - Jason Kennedy

Vertical Tracking Force Range: Due to the unique construction of the AT-ART1000, each individual cartridge is supplied with its own tracking force measurement to allow optimum setting, which is between a range of 2.0 to 2.5g