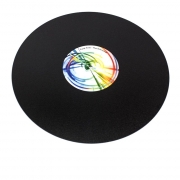 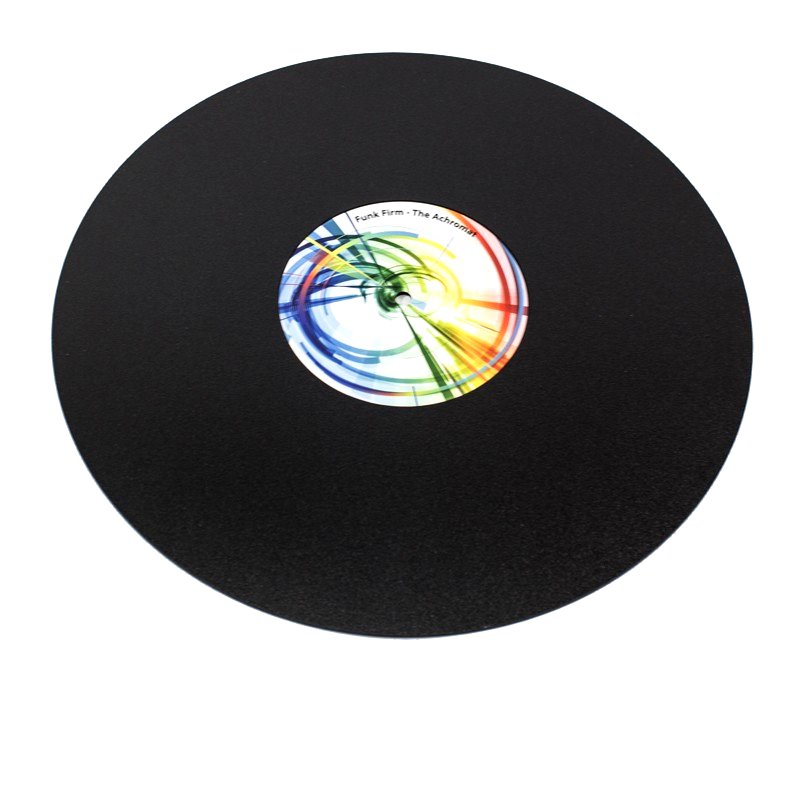 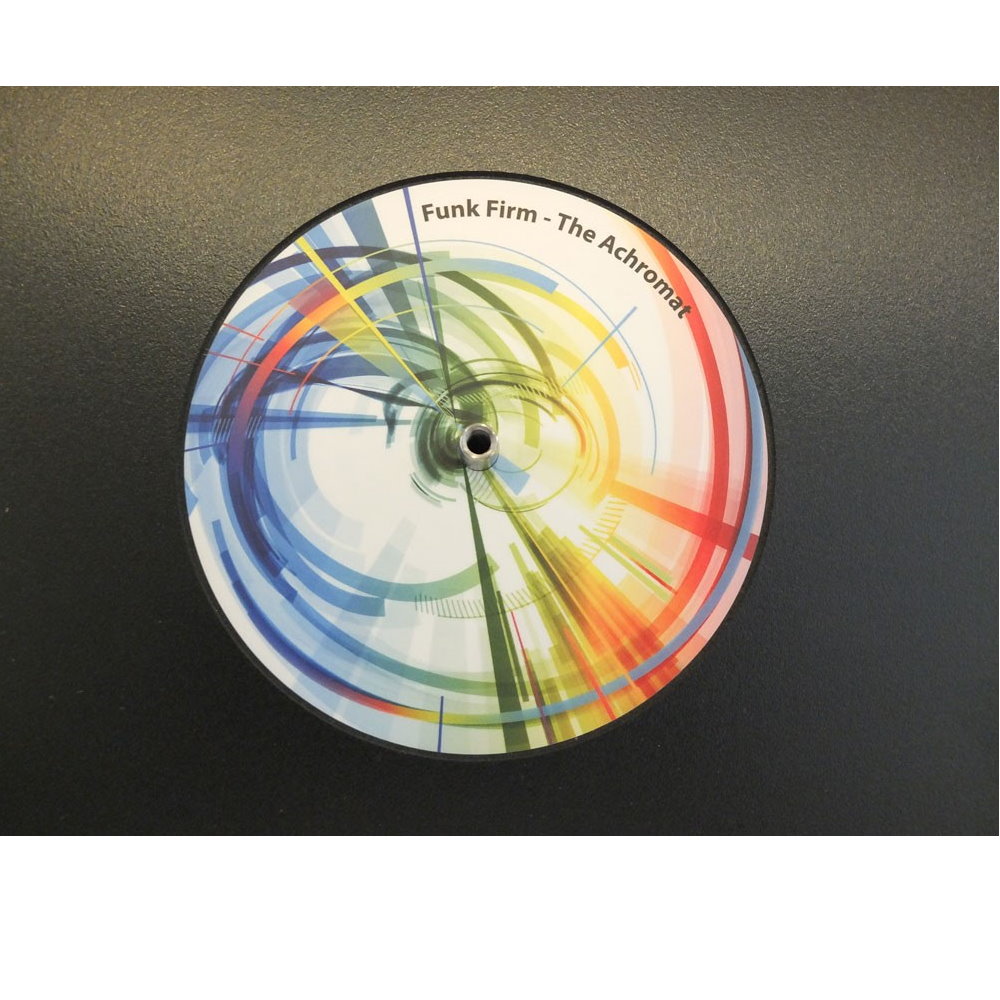 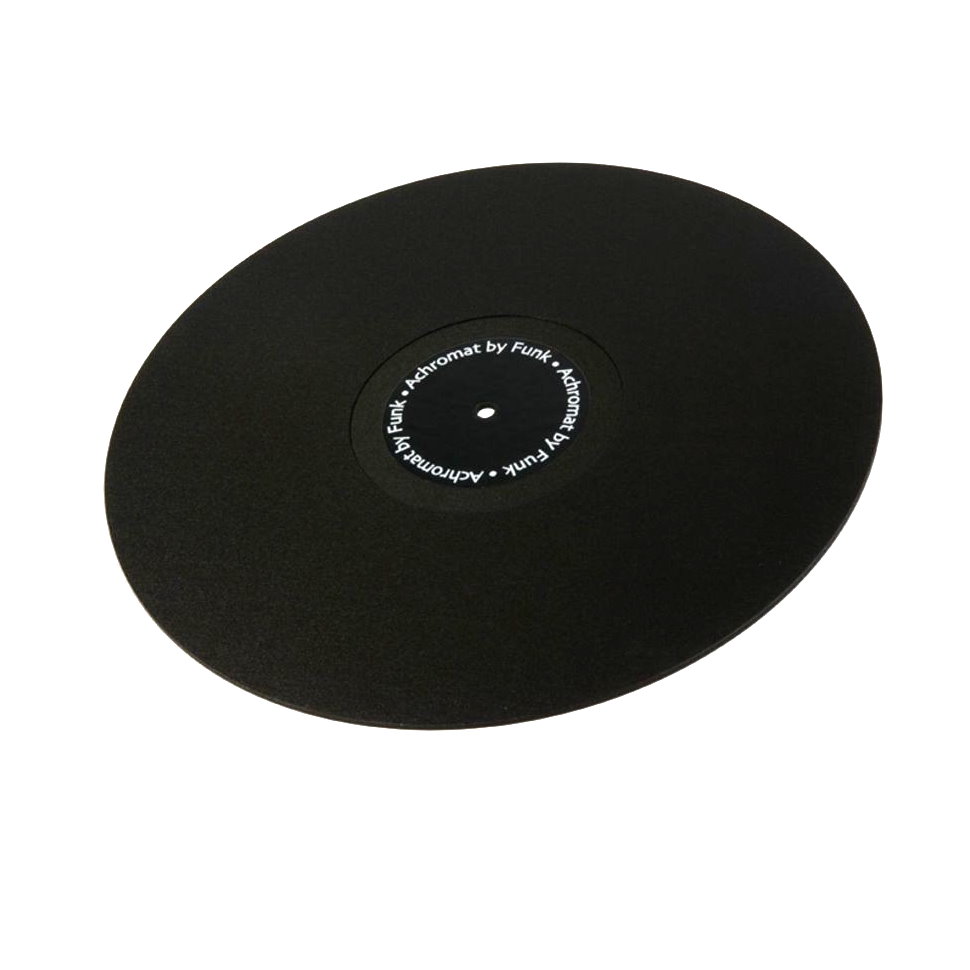 MY TAKE: If you have an SL-1200, you need this mat. Replacing the stock rubber mat with the Achromat will give you faster transients, better resolution and improved micro and macro dynamics. Well worth the price of admission – buy it! As a sidenote, performance can be further enhanced by adding a clamp. The Michell Record Clamp is a cost-effective option at $60 SL-1200G owners should consider the Stillpoints LPI, it's a stunner. - Galen Carol

Specially designed for the SL-1200, this version of the Achromat is a perfectly sized replacement for the stock rubber mat and will give instantly hearable results with major improvements in almost all areas of reproduction.

In 1979 Arthur Khoubesserian was the first to employ acrylic as a platter to vinyl interface. Continued research and development led to the introduction of the first Achromat in 2005. Development has continued apace resulting in the latest incarnation of the Achromat – a superlative product.

Why A Mat is Important -

The stylus accelerates at up to 20,000g. This means your groove wall is not so much caressed but more akin to being pummeled by a road hammer creating traveling shock waves. When there is a material change (the record sitting on a felt mat, say) these waves are reflected back into the vinyl and those vibrations are picked up by the stylus and heard as coloration. Achromat eliminates the reflected energy and its negative effects.

Millions of tiny bubbles within create complex pathways and that’s where the energy gets lost as heat. In this way, Achromat acts like a considerably thicker mat. Its job is complete. No other mat is like it and all it takes is a simple A-B comparison to demonstrate the differences against other supports. Longer-term listening allows subtle nuances as well as greater bass intelligibility to be appreciated.

What the Reviews Say -

In 2009 Achromat came top in a mat comparison in HiFi Choice and then went on to win the Gold Award for Accessory against all comers. And of course, there are the testimonials from happy customers. It has become the mat of choice for LP12 owners and also Technics SL1200 turntables.

No wonder Achromat is the World’s top-selling mat in use!

Tech Radar: “The Funk Firm arose from the ashes of Pink Triangle, the late lamented purveyor of turntables designed to be as near non-resonant as possible, and the Achromat turntable mat is their attempt at reducing resonance.

“Funk's brief is similar, but its range more diverse and this mat is a product intended principally to benefit non-PT/Funk turntables.

“The name derives from 'achromatic', meaning colourless, which gives a clue as to the claims made for the sound. This is achieved by using a foamed-plastic material which rapidly turns vibrational energy into heat, hence avoiding resonance.

“The mat is hard and fairly stiff and is available in 3mm (as tested) and 5mm thicknesses, the latter £5 dearer. There's a recess for the label to ensure the LP contacts the mat properly.

“We found that the effects of the Achromat are most pronounced on a metal platter, as expected, but it does also work on plastic platters. In the latter case, it gives a slight improvement in detail and stability of imaging, but its effect on the bass is not necessarily going to be to everyone's taste – it tends to become slightly lighter and 'faster'.

“On a metal or glass platter, replacing the usual felt or rubber mat, the Achromat gives a sound that is indeed considerably less coloured and also distinctly more detailed than before.

“Voices seem more natural and large ensembles of instruments are very well-defined and differentiated. Bass is roughly similar in weight and extension, but has less overhang and tonality is given a lift in precision across the frequency range.”

Our Verdict: A very impressive upgrade on metal platters, this mat has some benefits on plastic platters, though some may prefer the bass without it. – Richard Black

Analog Planet: (Brief excerpt from Mr. Fremer’s comments on the Technics SL-1000R). “I ended up using a variety of mats including the Funk Firm Achromat and Stein's Pi mat. I'm not a fan of thick soft ribbed rubber mats.”

"Hello Galen: I now have had sufficient experience with the Achromat 1200 to say that its contribution to turntable performance is superior to any other mat or mat combination I have tried. Good show." - R.S.

"Galen: Just installed the Achromat on the SL 1200 GAE. Major improvement in clarity, less smear/muddiness around instruments. I had to play with cartridge loading slightly to limit some of the high-end sizzle, but lots of room to do this. Quite a stunning improvement." - R.P.

NOTE: To make the patented Achromat, The Funk Firm uses a proprietary material composed of carbon fiber and other soft materials.
The structure and composition of the material are especially effective at damping unwanted resonances and improving performance.
However, unlike metal, acrylic, or glass mats, the Achromats cannot be machined to a ruler-flatness, so some variation is to be expected.
Included with each mat are double-sided sticky dots to adhere the mat to the platter and flatten out any significant deviations.