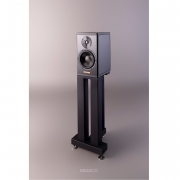 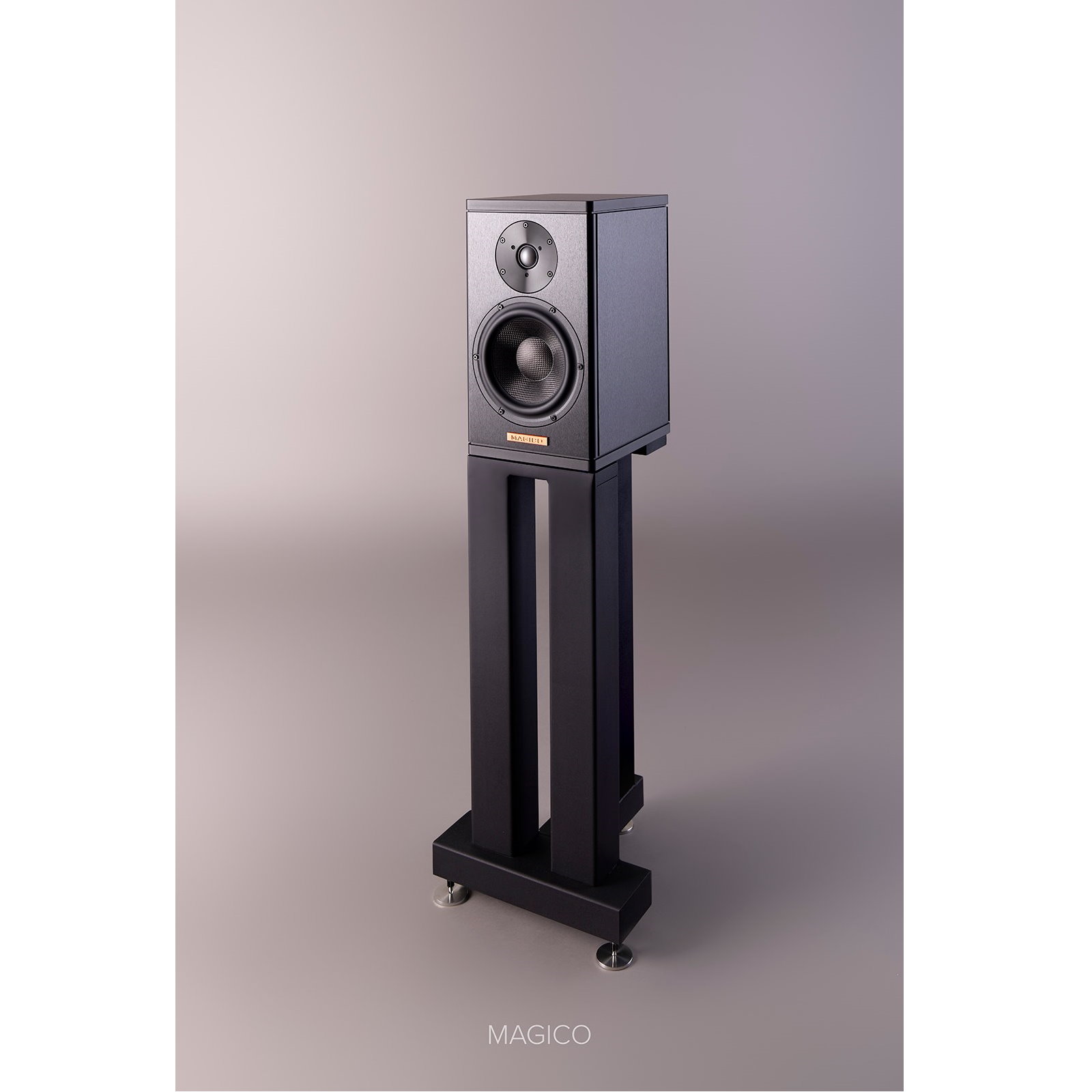 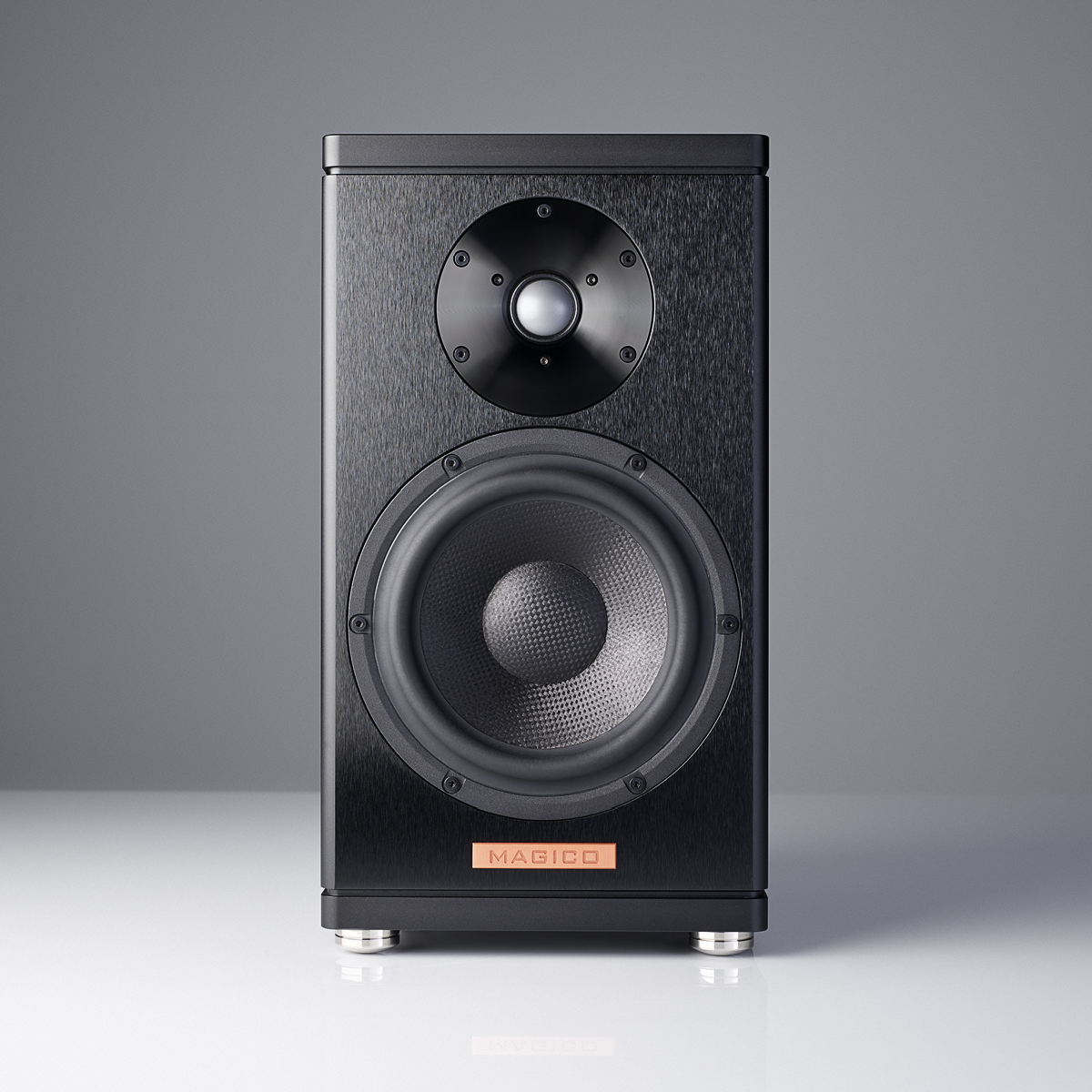 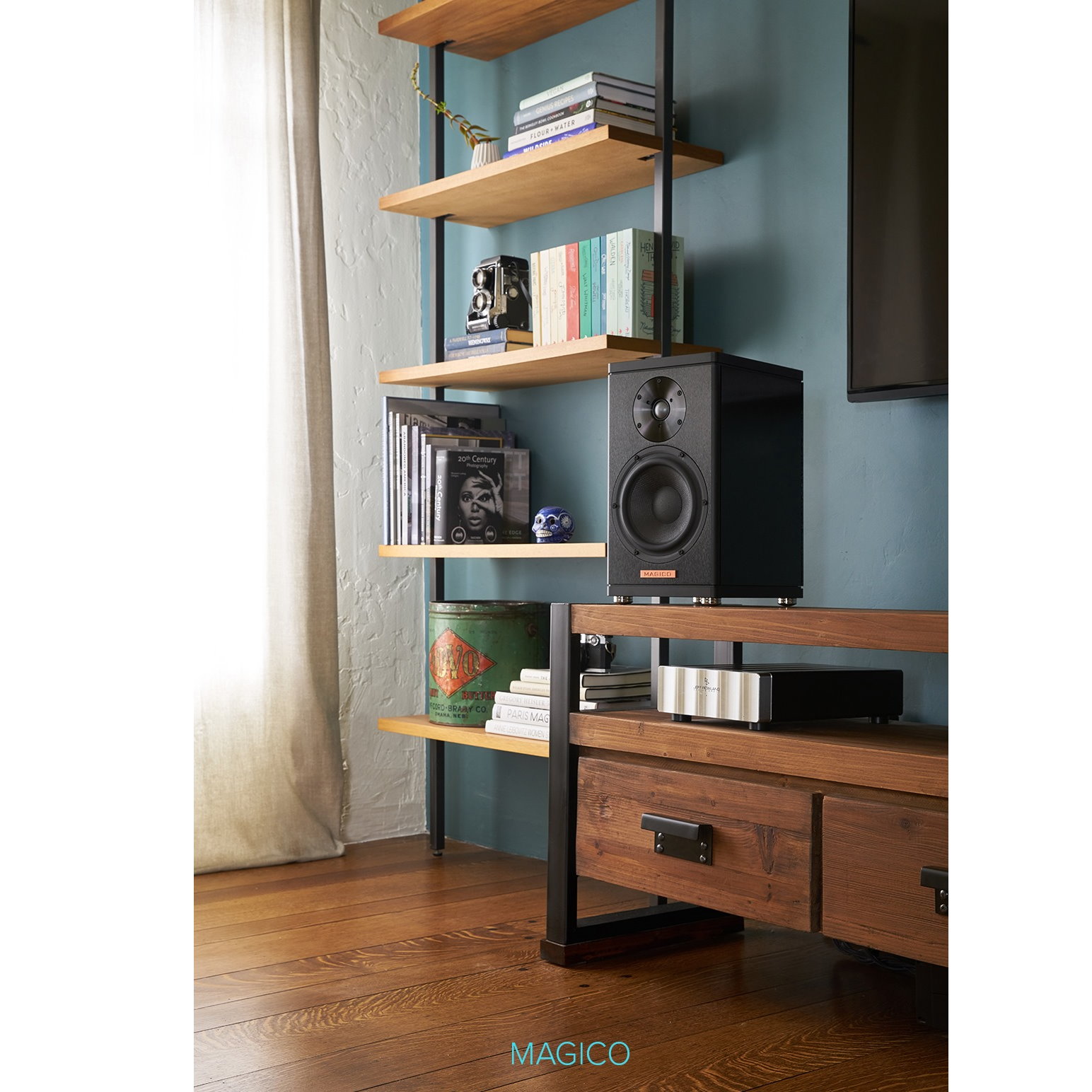 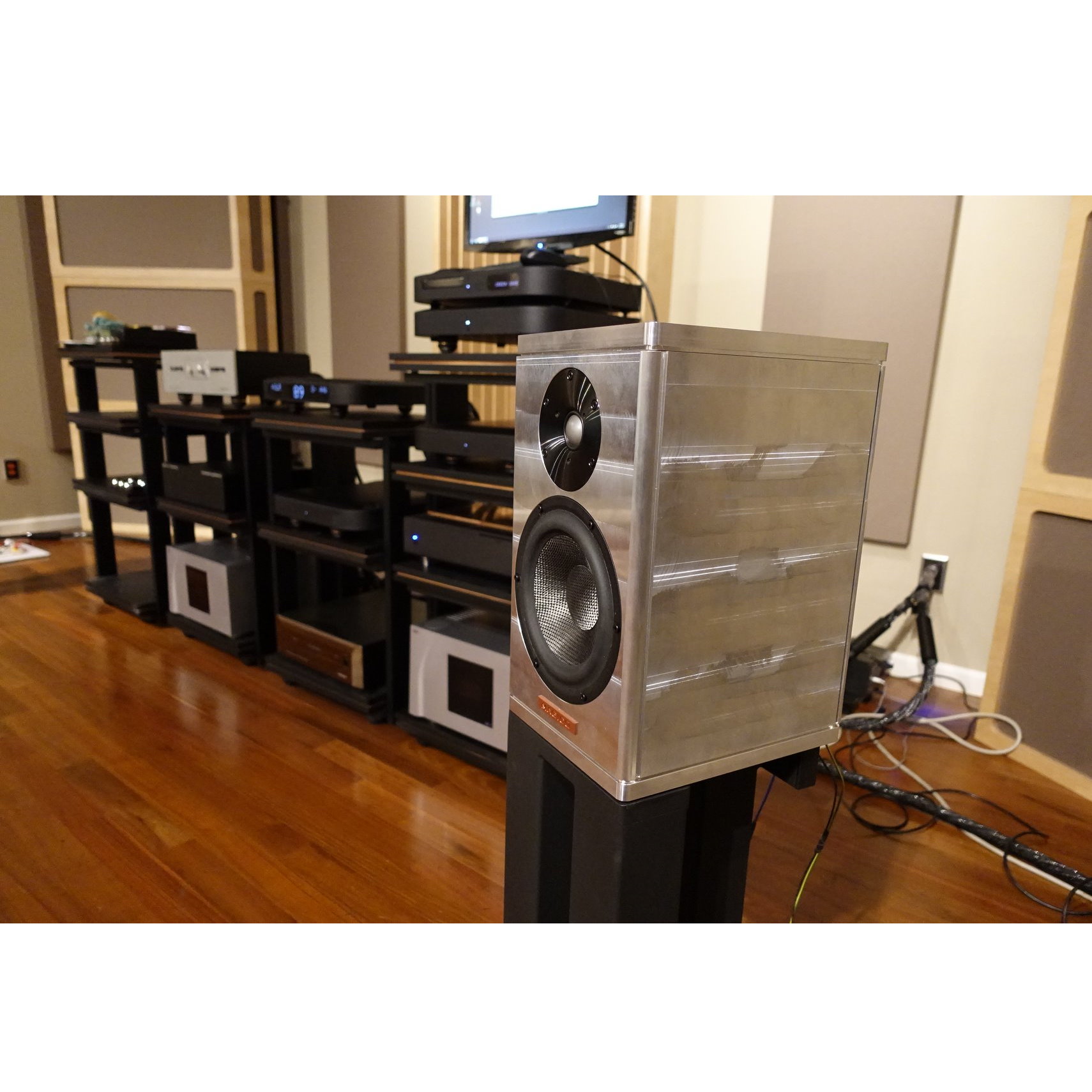 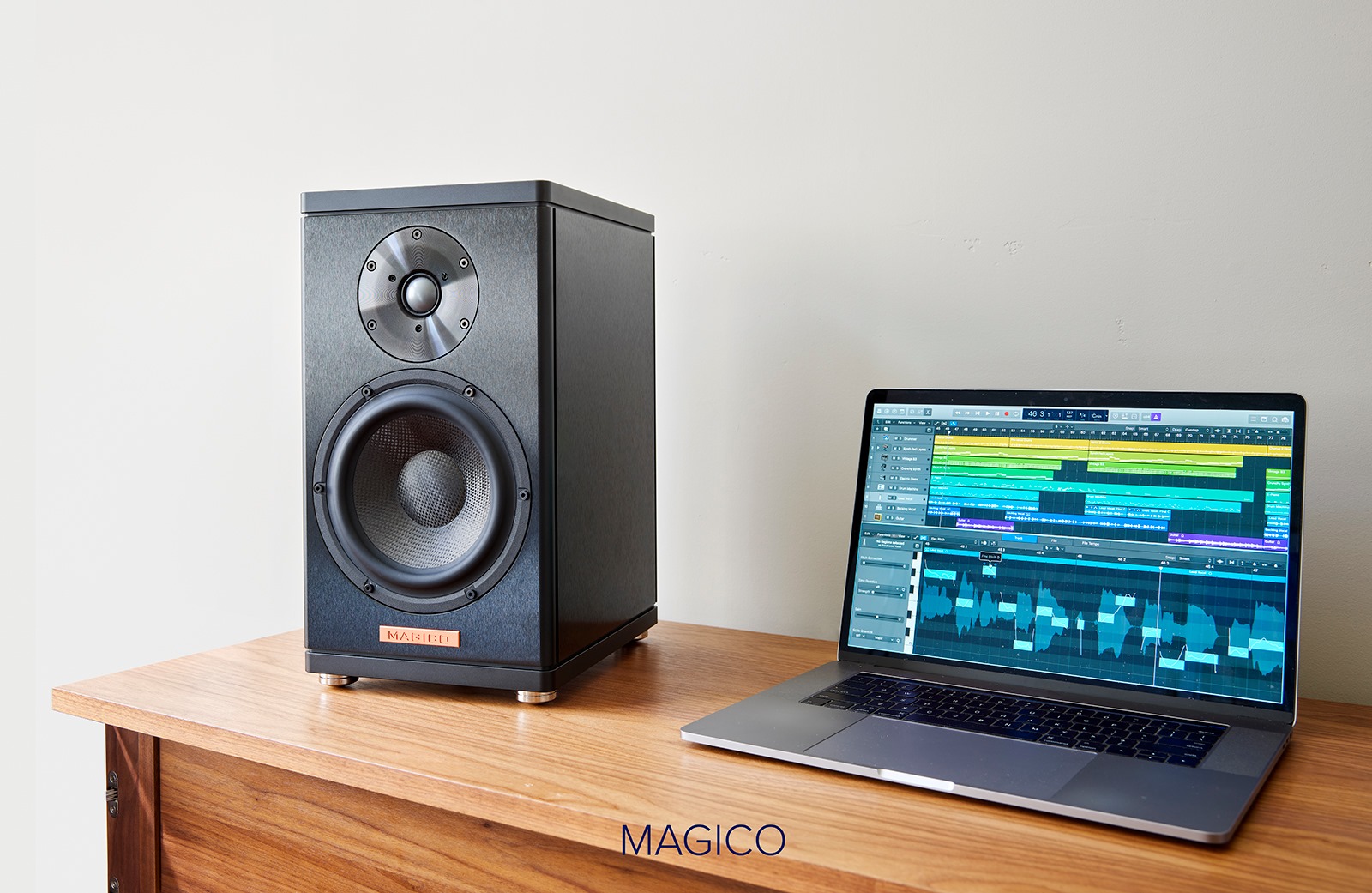 MY TAKE: MAGICO loudspeakers employ an impressive array of esoteric materials and manufacturing processes to craft speakers that are both incredibly accurate and immensely engaging on an emotional level. I have yet to hear a speaker that captures more of the subtly and nuance of the recording while at the same time conveying the intent and emotion of the music. Simply put, MAGICO speakers communicate the musical event without addition or subtraction of information – exactly what a speaker should do. - Galen Carol

Building on the tremendous success of the A3, Magico is proud to expand the A-Series with the introduction of the new A1 bookshelf loudspeaker -- a fully braced aluminum enclosure, beryllium dome tweeter, carbon Nanographene cone, and our renowned elliptical crossover. The A1 represents an unprecedented value in its price category.

The A1 enclosure is constructed using ⅜” thick 6061 T6 aircraft grade aluminum, similar to the enclosure developed for the Q1 and is available in an elegant brushed-aluminum, black anodized finish. An innovative internal bracing technique, along with the most advanced damping materials makes the sealed enclosure incredibly rigid and free of unwanted mechanical resonances. The
complete enclosure design of the A1 is evaluated in simulation using the latest FEA software along with physical testing to meet the uncompromising requirements of Magico for optimized enclosure rigidity, stability and to ensure benchmark acoustical standards.

Featuring the same tweeter as the full range A3, the A1 utilizes a pure Beryllium-diaphragm with an optimized 28-mm dome based on the fundamental design platform and geometry of our reference MSeries tweeter. The customized neodymium motor system is encased in an improved back chamber with our latest generation damping materials that facilitate ultra-low distortion, higher power handling, massive dynamic capabilities, and extended linear voice coil movement.

The newly developed 6.5-inch mid-bass driver features a Multi-Wall carbon fiber cone with a layer of XG Nanographene, providing optimal stiffness to weight ratio and an ideal damping factor. The driver frame has been designed, simulated and tested for the optimal combination of stiffness and damping. Minimum acoustical impact is achieved through reducing vibration modes while maximizing airflow.
The motor system incorporates extra-large magnets to ensure a stabilized magnetic field in the 39-mm pure titanium voice coil. The A1 mid-bass driver is optimized for minimal music related distortions in its bandpass, in both the frequency and time domains using state of the art finite element analysis
simulation of acoustical, mechanical, electromagnetic, and thermal behavior.

The drivers in the A1 are acoustically integrated using Magico’s proprietary Elliptical Symmetry Crossover topology that utilizes state-of-the-art components from Mundorf of Germany. The 2-way network features a 24db per octave Linkwitz-Riley filter that maximizes frequency bandwidth while preserving phase linearity and minimizing intermodulation distortion.

Soundsatge!: "My attitude has changed with the times. Nowadays, many companies produce two-way minimonitors priced in the high four and low five digits -- speakers that not only look as if they should cost that much, but sound it. Magico’s A1 is one of them. The all-black A1 isn’t beautiful to look at, but it’s extremely well built, and very accomplished in how it sounds when given enough power -- its full, rich, superbly voiced sound belies the speaker’s size, and has a purity through the midrange and highs that made it intoxicating to listen to. If my room was even a bit smaller, I’d consider buying a pair of A1s to use as my reference stand-mounted speaker. This minimonitor with a maxi sound has surprised me more than any other audio product in a long while." - Doug Schneider

HiFi+: "... the loudspeaker is one of the most uncompromisingly uncoloured stand-mounts you can find, yet without the dynamic foreshortening that high-enders equate to small cabinet designs. Yes, it rolls off at 35Hz, but that is an honest roll-off rather than an exaggerated tale-wagging exercise. It’s the difference between bass that is ‘taut’, ‘dry’ and ‘honest’. And bass that is ‘impressive’ yet ultimately ‘flubby’, ‘flaccid’ and ‘indistinct’. This means it aces the ‘Trentemøller Test’; playing ‘Chameleon’ from Trentmøller’s The Last Resort [Poker Flat] results in bass notes that are clean and precise; other similarly-sized loudspeakers make those bass notes sound deeper, but on closer investigation they come with a lot of overhang, and that slows the sound down.

"Long after you have grown accustomed to its bass (cue Rex Harrison), it’s the clarity and detail that really hit home. Like most Magicos, the A1 is a resolution monster. If it’s on the recording, it’s presented for you through the loudspeakers without grace or favour. This is something that people who haven’t experienced it think is something like over-stimulation of the senses. Another way of looking at this much detail is “where have you been all my audio life?”, and that usually comes from those who have heard what this much information can do for their audio pleasure. Take ‘Tearjerker’ from Jarvis Cocker and Chilly Gonzales’s Room 29 [DG]. This simple recording (just voice and piano recorded in a hotel suite) can be played on any system and it sounds good, but through the A1, it’s truly mesmerising. The level of information puts you not just in the room, but almost between the two musicians, and the bittersweet (but mostly ‘bitter’) lyrics hit home. It’s the antithesis of ‘easy listening’ but leaves you hungry for more. More, in this case being everything from a string quartet playing Schoenberg to all of Joy Division’s Closer album [Factory]. Such is the power of the A1, it took some time to shake off the sads.

"For the last 30 or more years, stand-mounts speakers have tended not sell as well as their floorstanding counterparts. The Magico A1 deserves to be one of the rare exceptions to that rule. If you want uncompromising sound in a room compromised by its own size, the A1 is one of the few to really meet those demands." - Alan Sircom

Video - How to Build a Magico Loudspeaker